La Siesta is a tapas bar straight out of southern Spain by Isaac Ye (Tres Perros) and Chef Sergio Moreno (previously of Commune Social) – who is taking it back to his Andalusian roots, cooking the food he knows and loves. 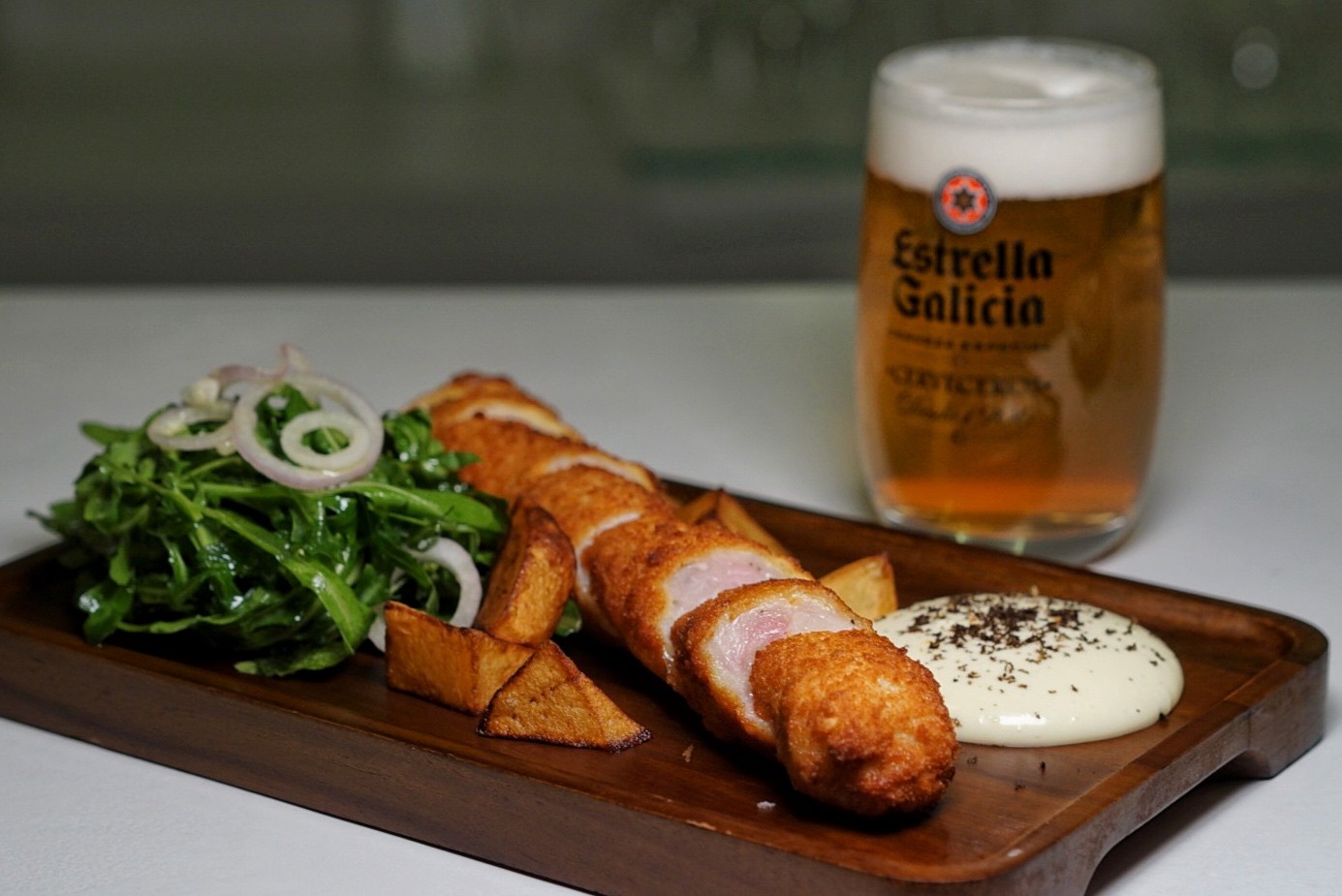 La Siesta isn’t a restaurant per se, but rather a casual ‘bar de tapas’ – an everyday pre-dinner hangout for an aperitivo cocktail and snack.

That’s because dinner for the Spanish takes place around 11pm, with the hours preceding that spent sipping jerez, sharing plates of tapas and catching up on the latest comings and goings with whoever happens to be passing by – the exact vibe emulated at La Siesta. The idea is not to create something innovative and unheard of before; rather, it’s the opposite. La Siesta is the bustling neighborhood tapas bar found on every street corner in Spain, just transplanted onto our very own Shanxi Bei Lu.

It’s a taste of Spanish hospitality that Shanghai’s been craving. Begin with a glass of Vermouth (RMB38) – a fortified wine blended with aromatic herbs – sipped on as commonly as water across the entire country.

Pleasantly sweet, botanical, with a slightly bitter finish, a glass is usually garnished with an orange wheel and an olive for that extra hit of citrus and briny pop. 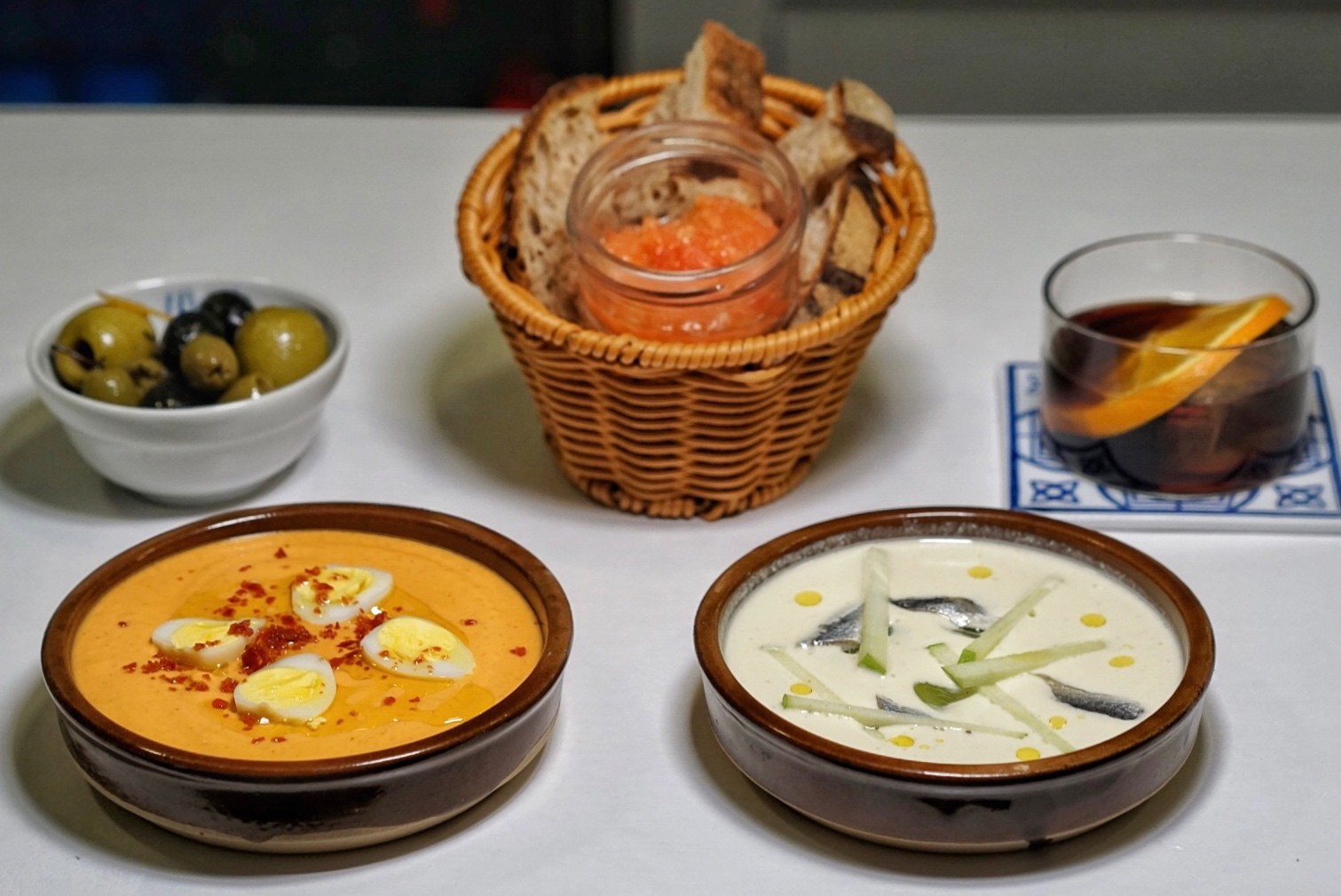 Toasted fingers of bread shmeared with smashed tomato as the Pan con Tomato (RMB8), herb-marinated olives – or Aceitunas Aliñas (RMB20) – luscious bechamel and ham-stuffed Croquetas de Jamón (RMB52) dotted with truffle aioli, and a smattering of other tapas whet the appetite in the most unmistakably Spanish of ways. Andalusia’s Arabic influence that derives from the Moor conquests of Spain’s past still makes itself apparent in many of the dishes, like the Ajo Blanco (RMB36) – a velvety, cold soup, made in the Málaga style, Chef Sergio’s hometown. 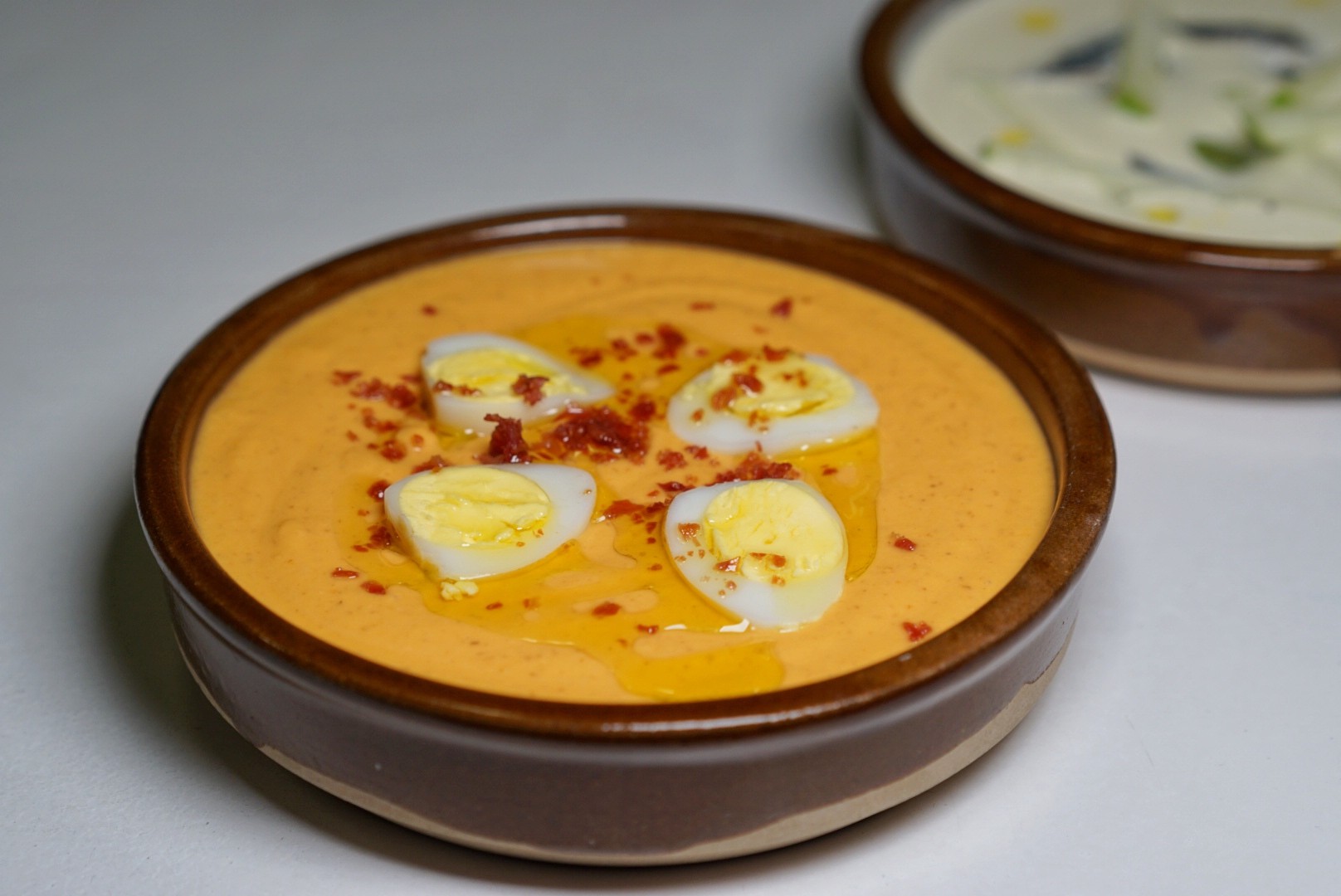 Like a creamy gazpacho thickened by blended, vinegar-marinated bread, a topping of crispy pork, hardboiled egg and a lashing of olive oil help cut through the lush richness, pulling diners in for another spoonful. Springy shrimp, coated in a metric ton of minced garlic and spices, sizzle in a cast-iron skillet as the Gambas Al Pil-Pil (RMB60).

If you manage to save some of the toast from before, there is no better use for it than soaking up the garlicky, spiced olive oil left in the bottom of the pan. 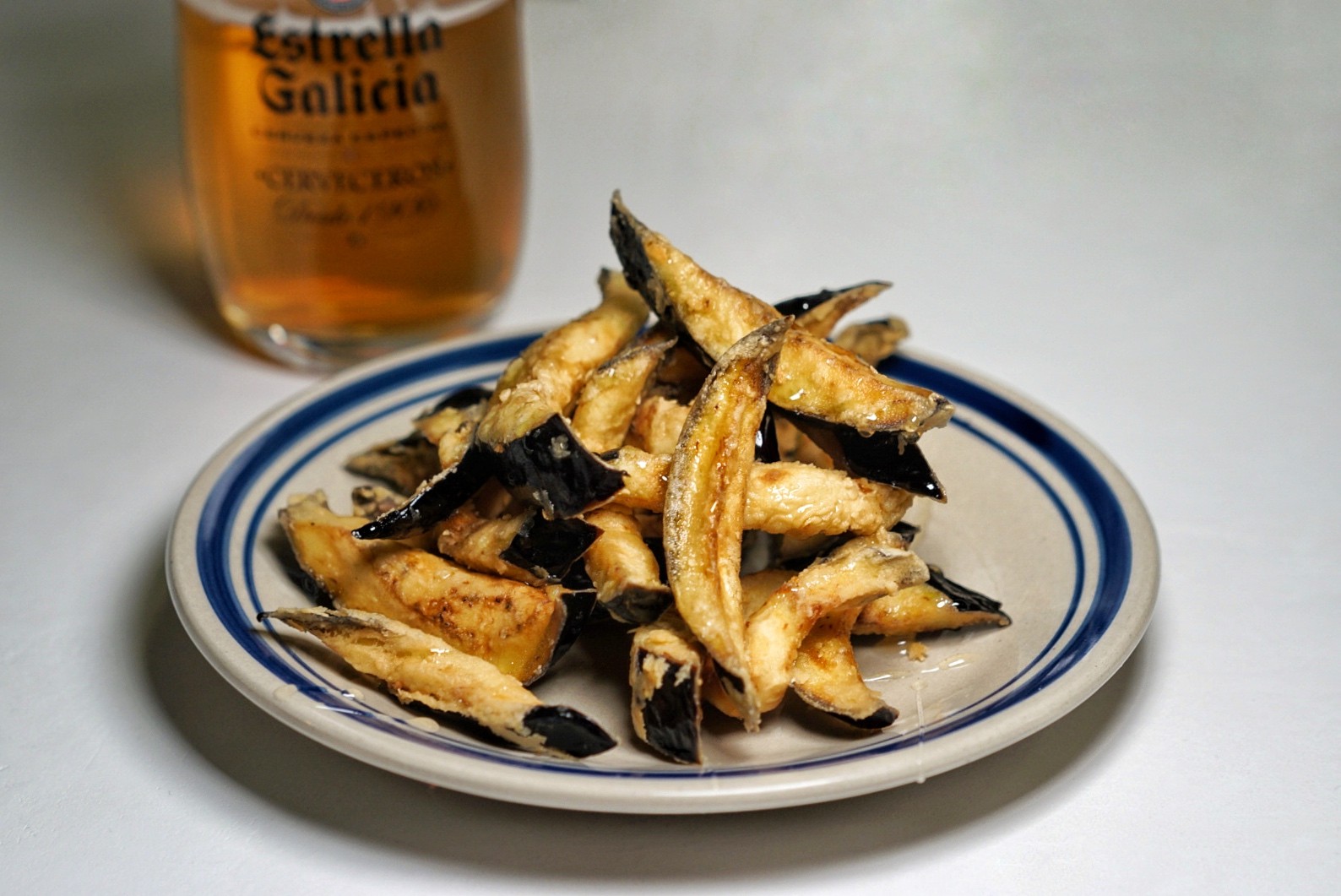 Sliced spears of eggplant are flash-fried and dribbled with honey as the addicting Berenjenas Con Miel (RMB36), a salty-sweet staple on every Andalusian menu. 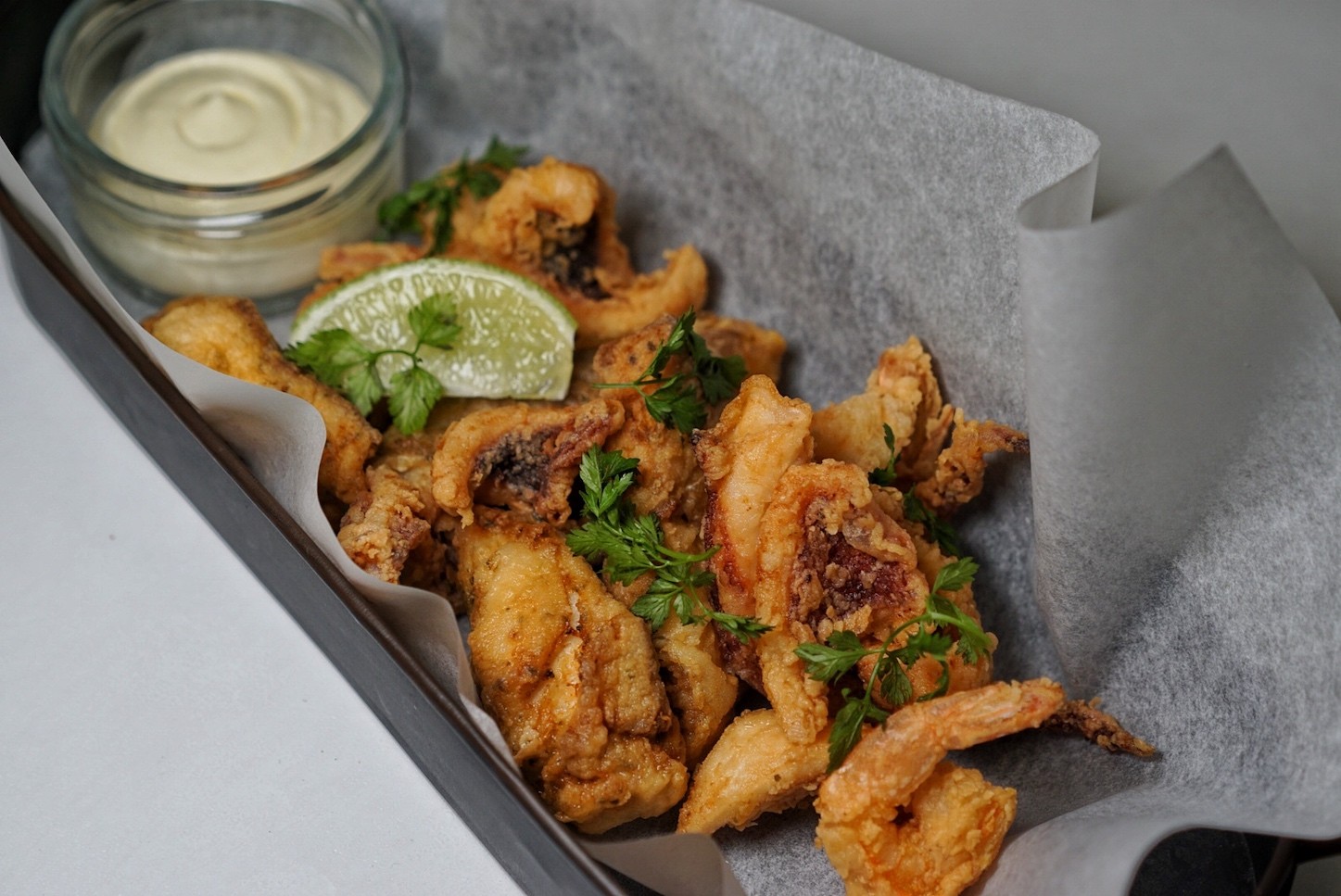 The Flamenquín Cordobés (RMB68) is another Andalusian staple. Hailing from the city of Córdoba, slices of jamón Iberico and cheese are wrapped around a cut of pork tenderloin, coated in a breadcrumb batter and deep-fried.

It’s sinfully scrumptious and – by our medically unprofessional calculation – roughly zero calories, so you might as well order a second from the get-go. 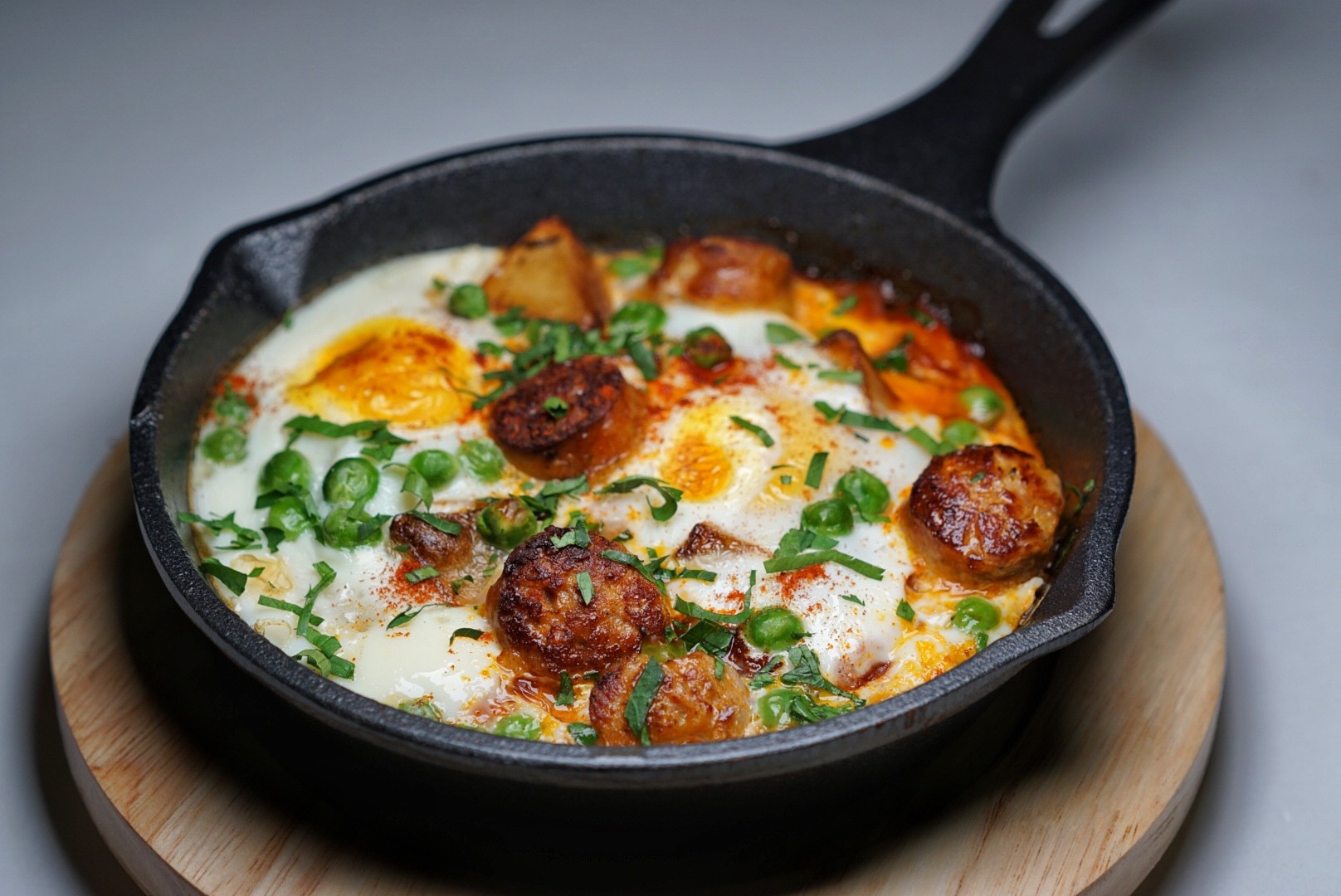 Stewed in a fino sherry butter sauce rather than white wine, the Mejillones al Fino con Alcachofas (RMB58) are Canadian mussels accompanied by artichokes – as the name suggests – and crunchy fennel, a smattering of herbs for freshness. 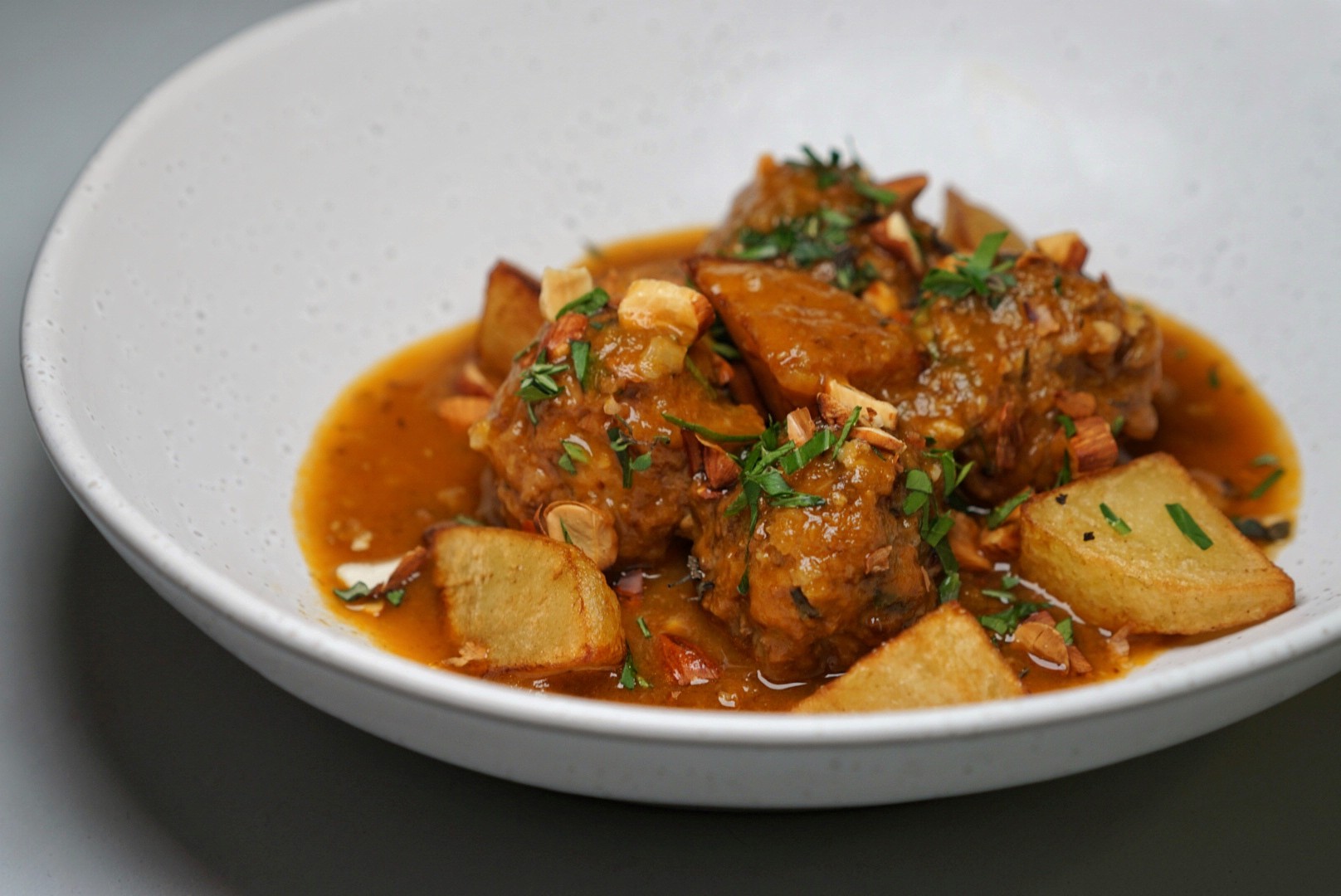 If you take away only one piece of advice from this article, it’s don’t skip dessert.

They are down-to-earth, presented humbly as they are and taste like something a Spanish abuela might bring to a wedding because she doesn’t trust the caterer. 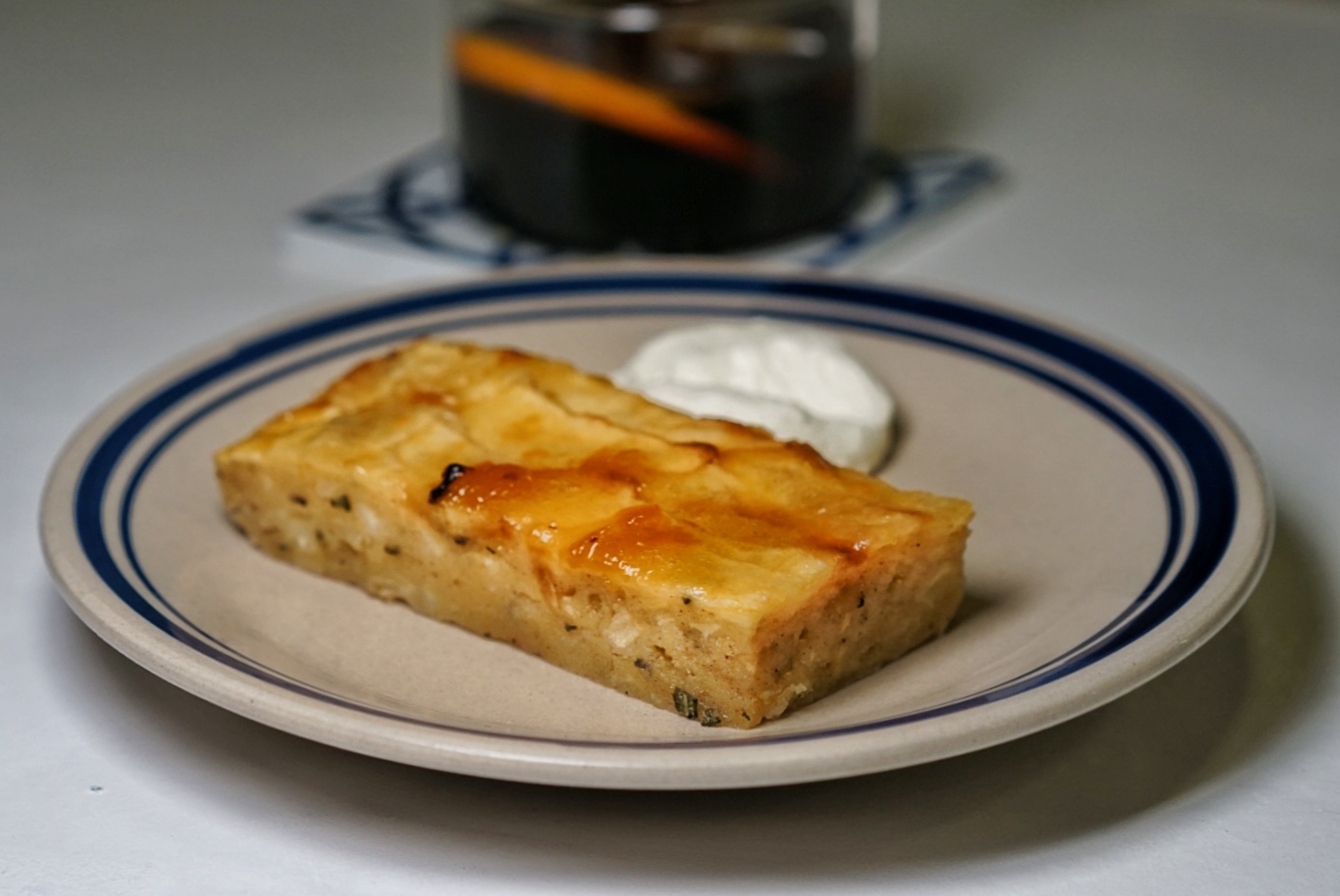 A modest slice of Tarta de Manzana (RMB42) is rimmed with thinly sliced baked apples, but what lurks beneath – a treacly apricot jam imparts a tart sweetness, while rosemary (as an alternative to the common apple spiced with cinnamon) elevates each bite with a savory hint. 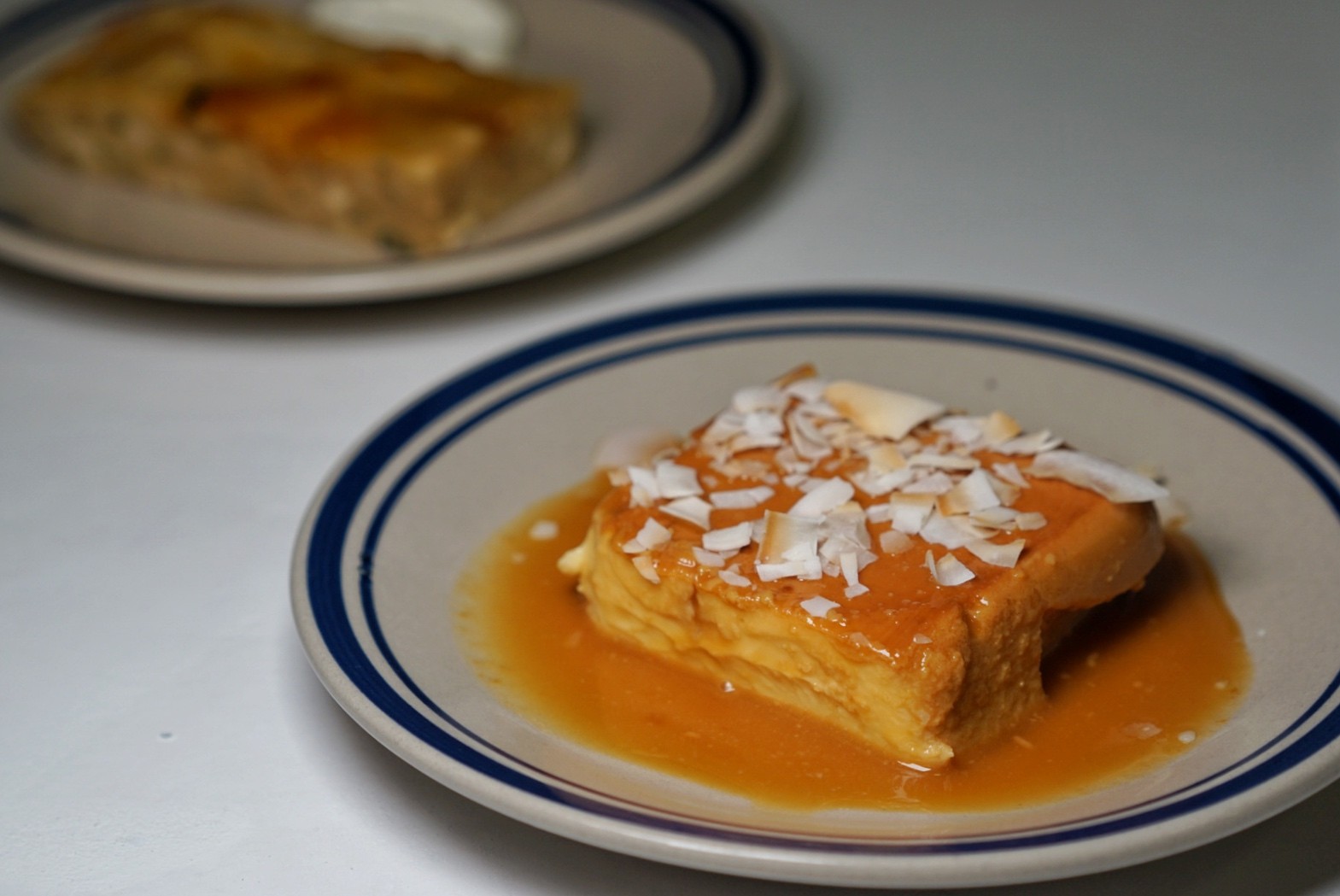 Palo cortado sherry is reduced down into a sticky caramel that coats the custardy Coconut Flan (RMB42), supple and creamy, coating the spoon like warm butter. And this is just the beginning; as the menu develops and close to doubles in size, expect deeply niche regional specialties like zurrapa and gazpachuelo, along with a few mains and more snacks and desserts.

While we tend to zero-in on food, the drinks are equally important here, with honest prices across the board to match a straightforward drinks menu – no frills necessary.

Currently, La Siesta offers three varieties of vermouth and three sherries, but that number will soon expand to help introduce both approachable beverages’ liquid legacies to the Shanghai masses. There’s also Estrella Galicia on tap for just – get this – 25 rambos, plus wine starting at only RMB38 per glass – a real steal in Jing’an.

Rounding out the drinks lineup, some simple cocktails – sangria, rebujito, tinto de verano, a negroni made with fino sherry and rum instead of vermouth and gin, and a pretty standout selection of gin for G&Ts going from RMB55-110 a pop. Walking into the brightly lit space, patrons are welcomed by Chef Sergio and Isaac directly, along with those sitting at the bar – ‘Qué tal, amigo’ echoing throughout – because when you’re here, somehow you feel you know everyone already. 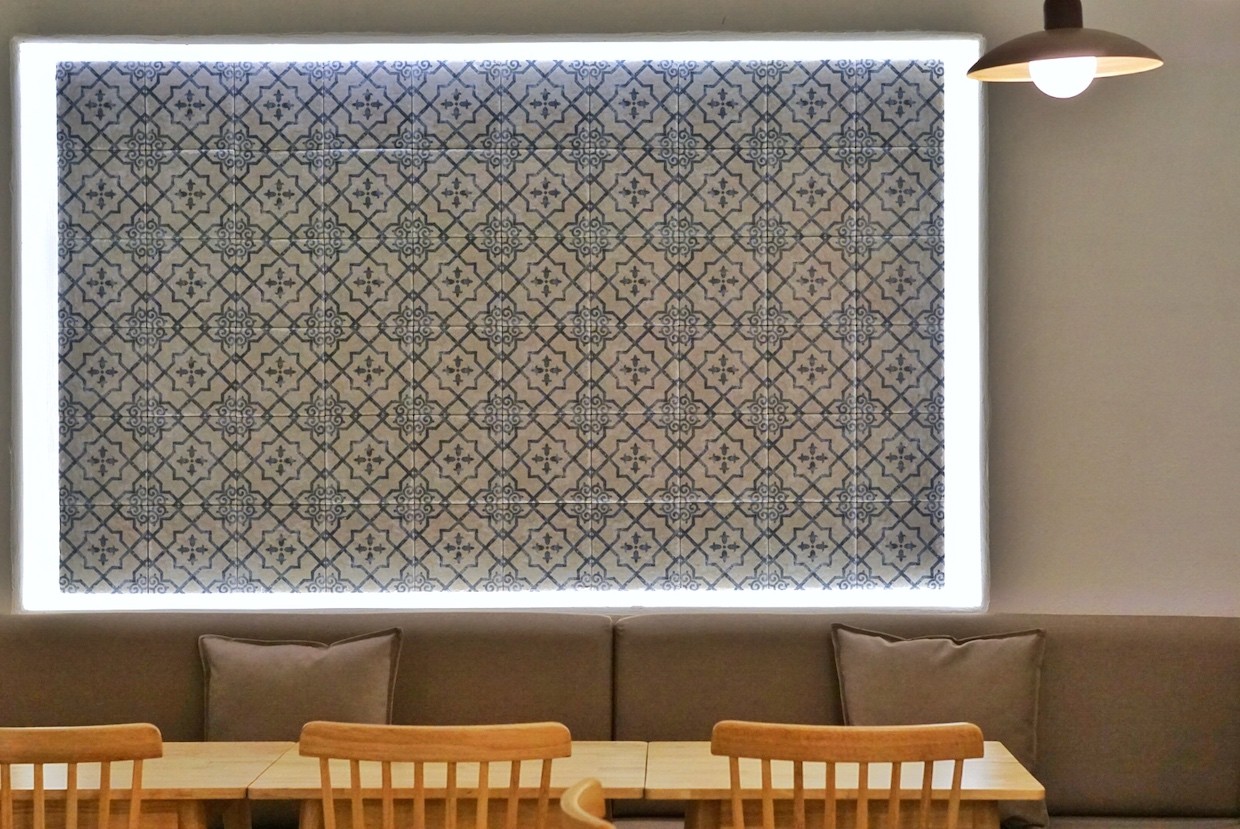 The décor is that of a Cordobesa patio, patterned in blue and white tiles, flowing water fountains and hanging plants, against a white backdrop inspired by southern Spain’s hilltop towns. The shotgun bar setup also mirrors that which one would find in Spain – a narrow, communal space lined by a bar on one side a counter on the other, meant mainly for standing, mingling and befriending your neighbor.