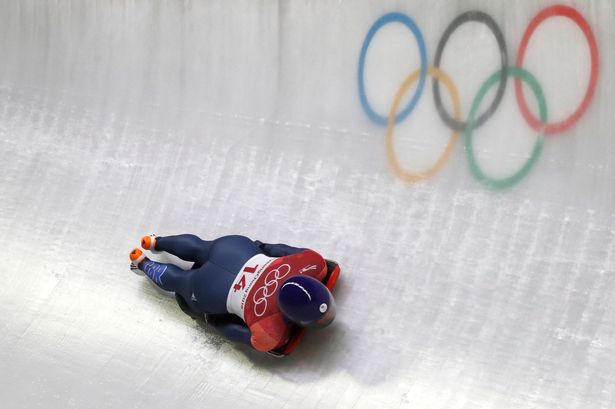 The most macho of macho men, Ernest Hemingway, once said “There are only three sports: bullfighting, motor racing, and mountaineering; all the rest are merely games.”

Well, he’d clearly overlooked skeleton, a sport that sees participants take a running start and launching themselves down a frozen track lying face down on a glorified baking tray, reaching speeds of over 130 kilomeres per hour and experiencing g-force 5 in the process. And they do it head first.

Previously just a men's event, it was removed from the Olympic competition list entirely between 1948 and 2002, with the discipline deemed too dangerous for participants.

Skelton has also been associated with traumatic brain injury, a phenomenon known as 'sled head,' with multiple suicides of former athletes linked to the sport.

At Beijing 2022, each rider will get four runs over the course of two days. Those four rides are timed down to the hundredth of a second and the times added together, so every run counts.

The athlete with the fastest total time is then awarded the gold medal.

With only six medals up for grabs, skeleton has the joint-fewest events at the Winter Games – which means competition for a podium finish is fierce.

Reigning Olympic champion Yun Sung-bin of Korea finished a disappointing 17th at the 2021 World Championships. The event was won by German Christopher Grotheer, who picked up his second consecutive world title after also winning the event in 2020, making him a firm favorite to challenge for the podium in Beijing.

And don’t rule out Latvian veteran Martins Dukurs; the double Olympic silver medalist and six-time world champion has the most World Cup titles in skeleton history, and is known as ‘Superman’ by his competitors.

The last three Olympic gold medalists in women's skeleton have all represented Great Britain. And while two-time defending champion Elizabeth Yarnold (the most successful Olympic skeleton athlete of all time) has retired from competition, keep an eye on her compatriot – and 2018 bronze medalist – Laura Deas, who is looking to continue Team GB's medal streak.

Competition will come from the Germans, though; Tina Hermann picked up her fourth championship, and third consecutive skeleton title at the 2021 World Championships, while 2018 Olympic silver medalist Jacqueline Loelling finished second. Both should challenge for the gold medal in Beijing.

Good news on this front; the last three men's skeleton Olympic champions all represented the host nation of that Olympic Games. And, though China is yet to win a medal in the event, teammates Wenqiang Geng and Yin Zheng have the advantage of having had more time to practice on and master the Beijing track.

The same applies in the women’s for youngster Zhao Dan, who finished seventh at the 2020 Winter Youth Olympics, and teammate Lin Huiyang.