Fujian province in southeast China is famous for tea, and was one of the busiest ports for tea exports in the 19th century. The very word tea, originally te, is derived from the Fujianese dialect. Aside from the leafy beverage, Fujian is also often attributed with the invention of ketchup.

The word ketchup or ke-tchup (tchup being pronounced like zhi in mandarin) is derived from the Hokkien dialect traditionally spoken in Fujian and Taiwan. However, the Hokkien word ketchup describes a fermented fish sauce that, albeit a condiment, bears no resemblance to the tomato ketchup that is beloved around the globe today. While the name has roots in Fujian, can we really assert that the sauce is Fujianese?

Let’s first discuss the origin of condiments. Salt is essential for the body to function, and so ever since humans moved away from a nomadic meat-centric lifestyle and began to eat more grains, we’ve needed to add salt to our food. Our bodies need it, so our bodies crave it.

This salty craving is the reason we often ‘season’ our food. Let’s also not forget the macaques of Koshima who displayed a distinct preference towards washing their sweet potatoes in salty ocean water over fresh water and eventually began dipping the potatoes after every couple bites, according to Masao Kawai.

The ancient Romans had a fermented fish sauce of their own, as well as a mint sauce and a fondness for mustard. Claudio Giardino, an Italian archeologist who studied the origin of garum, or Roman fish sauce, says that it appeared in Roman literature as early as the 4th century BCE. 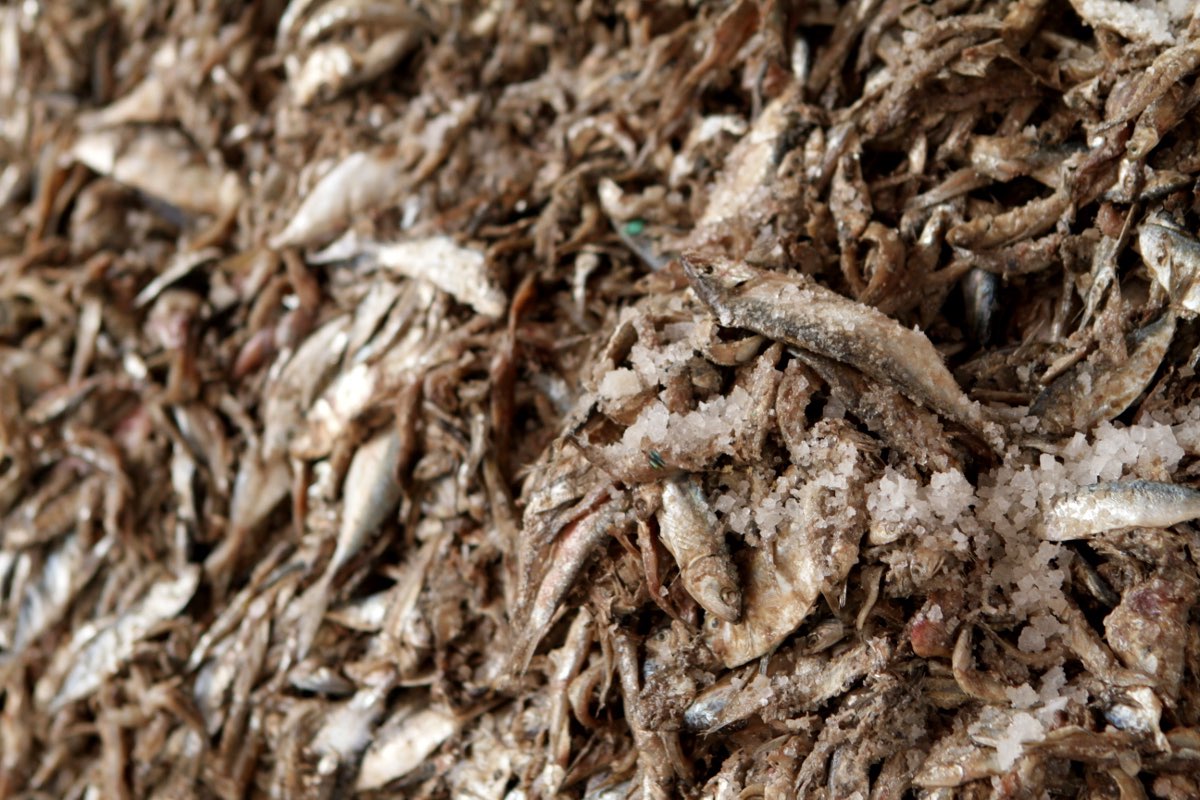 Salted anchovies get delivered to a fish sauce factory on Phu Quoc Island in Vietnam. Image via Frank Fox/Wikimedia

The main reason that Fujian lays claim to ketchup by way of its name is because Hokkien merchants were a pillar of trade in the region for well over half the millennium. Between 1300 and 1800, vast trade led the Fujianese diaspora to populate Indonesia, Thailand, Myanmar, Malaysia, Vietnam, Laos and the Philippines.

Although fermented fish appeared in China around 300BCE among other ingredients like fermented soy and meat, it surged in popularity during the period of Hokkien dominance in trade between southern China and the neighboring countries.

It is worth noting that fish sauce is a staple of the cuisine in all of the aforementioned countries and in some southern Chinese provinces. However, a ban on sailing and shipping during the Ming and early Qing dynasties would likely explain why northern China, Japan and the Korean peninsula rely more heavily on fermented soy than fish.

In spite of the isolationist laws banning maritime activities, Cantonese and Fujianese traders continued to sail the seas illegally throughout the 16th and 17th centuries and accounted for the majority of Asia’s maritime trade.

Andre Gurder Frank, an economist and sociologist, wrote that in the year 1700 alone, European ships left Chinese ports with only 500 tons of product while Chinese merchants brought in 20,000 tons.

The British Merchant Charles Lockyer’s An Account of the Trade in India from 1711 notes that the finest fish sauce comes from Vietnam but still refers to it as ketchup, thus acknowledging the influence of the Hokkien traders throughout the region.

By the 1600s, British and Dutch merchants who were engaged in the spice trade frequently journeyed to southeast Asia for a myriad of hot commodities. Fish sauce was popular throughout the region and, by the 18th century, British sailors had acquired a taste for the funky fishy sauce.

Along with soy sauce, another condiment said to have been invented in Fujian, the sauce had become a profitable export to satisfy the British appetite for culinary exploration.

Consumers in Britain found it relatively expensive for what it was – salted anchovies rotting in water – and soon set out to create their own versions with a wild array of seemingly arbitrary ingredients like mushrooms, walnuts, shallots, vinegar and spices.

This experimental attitude towards ke-tchup ultimately led to the addition of tomatoes. Slate provides this 1817 recipe from The Cook’s Oracle, which calls for a gallon of tomatoes to be simmered with anchovies, shallots, mace, black pepper, allspice, ginger, nutmeg, coriander and ground cochineal beetle (still commonly used today for red coloring in everything from yarn to Starbucks Strawberry Frappuccinos). 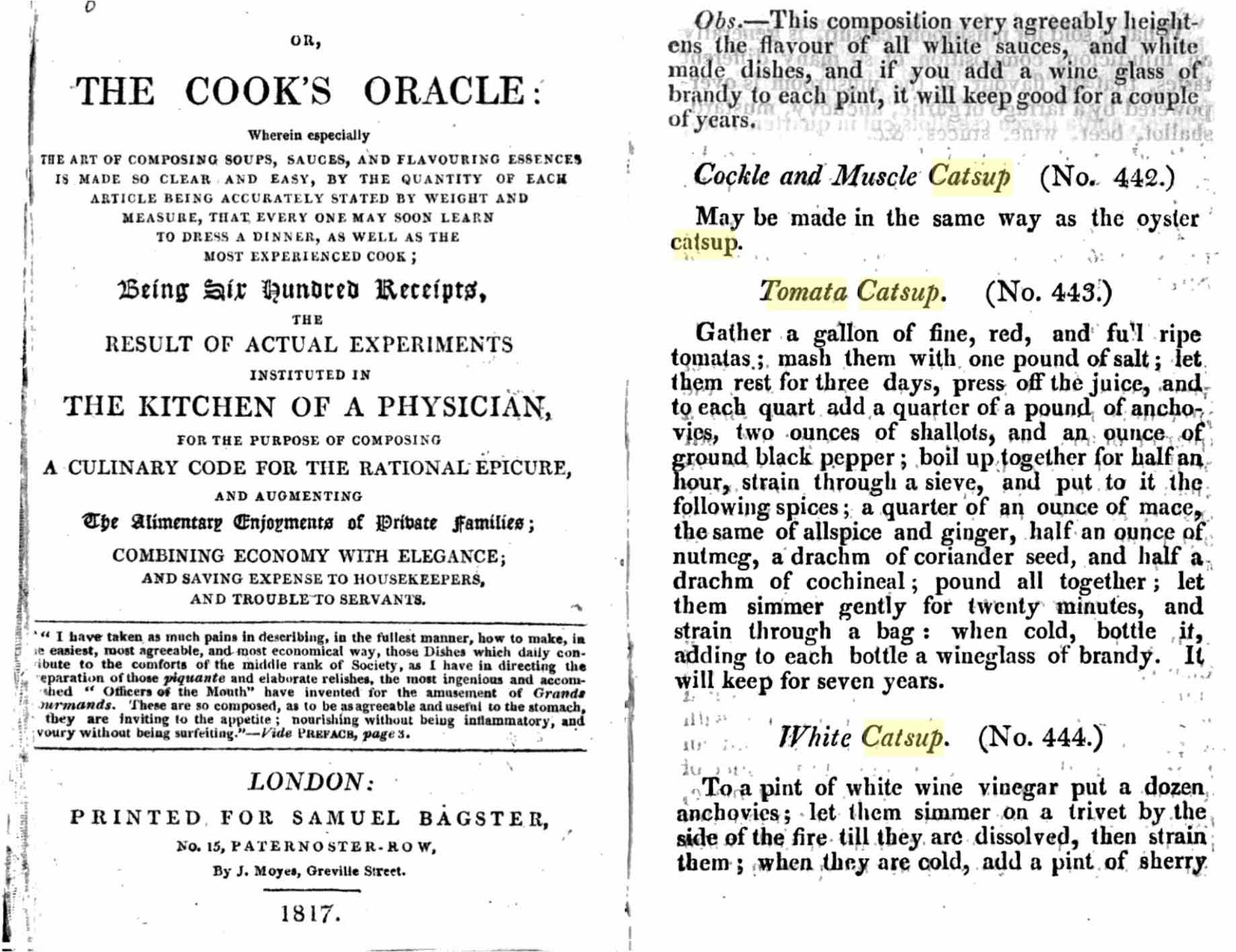 British recipe for tomato ketchup from 1817. Screengrab via Google Books

From Salt to Sugar

Sugar was added as a way to cheaply increase the shelf life and satisfy the American sweet tooth. The famous pickle company Heinz began manufacturing a simplified tomato ‘catsup’ in 1867, devoid of pungent anchovies and therefore any hint of its fishy Asian origins. Aside from the name, of course. 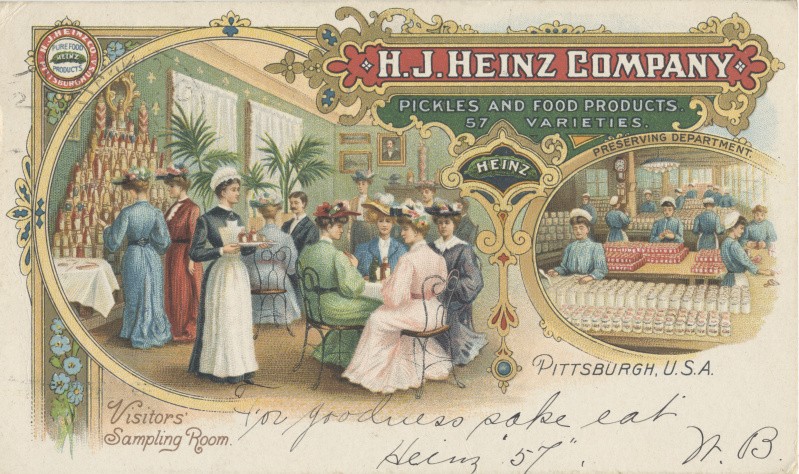 Fun times at the pickle plant – Heinz postcard from 1907. Photo via Wikimedia

Fujian nailed the branding when their word, ke-tchup, traveled so far through history describing an endless variety of sauces – probably both delicious and repulsive renditions.

But can we say that tomato ketchup is Fujianese? It’s arguably less Chinese than ‘orange chicken’ or Calgary’s own ‘ginger beef’. Fish sauce is delicious, but we won’t be substituting it for ketchup on our french fries any time soon.