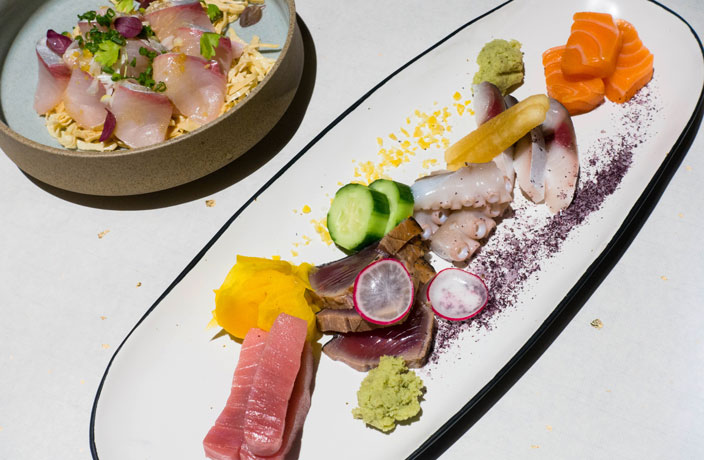 For a while, Shanghai was all about contemporary izakaya-style venues like Jeju Izakaya and Oha Eatery. We were patiently waiting for the next hot one to appear, when Azabu Dining snuck in below the radar. They opened at the end of last year on Nanchang Lu, across from Turkish institution Pasha. Combining Japanese ingredients with French and American influence, Azabu turns out several intriguing small bites and traditional Japanese standards in a serene setting.

On their diminutive first floor, Azabu has five bar seats opposite an open kitchen. After ascending a breathtakingly beautify spiral staircase made of unfinished wood, you’ll see it’s bigger than it seems. In addition to a modestly-sized main dining area, there’s a private dining room that fits 10 people and a secluded terrace table for two.

If you want to put yourself at the mercy of the chef, omakase dining sets are available from RMB500-900 per person. You have to book the omakase option ahead of time, so we stuck to the menu, choosing from sushi, sashimi, cold appetizers, hot mains, rice and noodles.

While not expecting much more from a five fish Mixed Sashimi Platter (RMB258) than quality seafood, the addition of vibrantly colored signature house-made sea salt in red wine and yuzu flavors whispers that there are more delights to come. Accenting thick slabs of tuna belly, saba mackerel, aji mackerel, salmon and octopus with salt, freshly ground wasabi or pickled vegetables is a lively start. 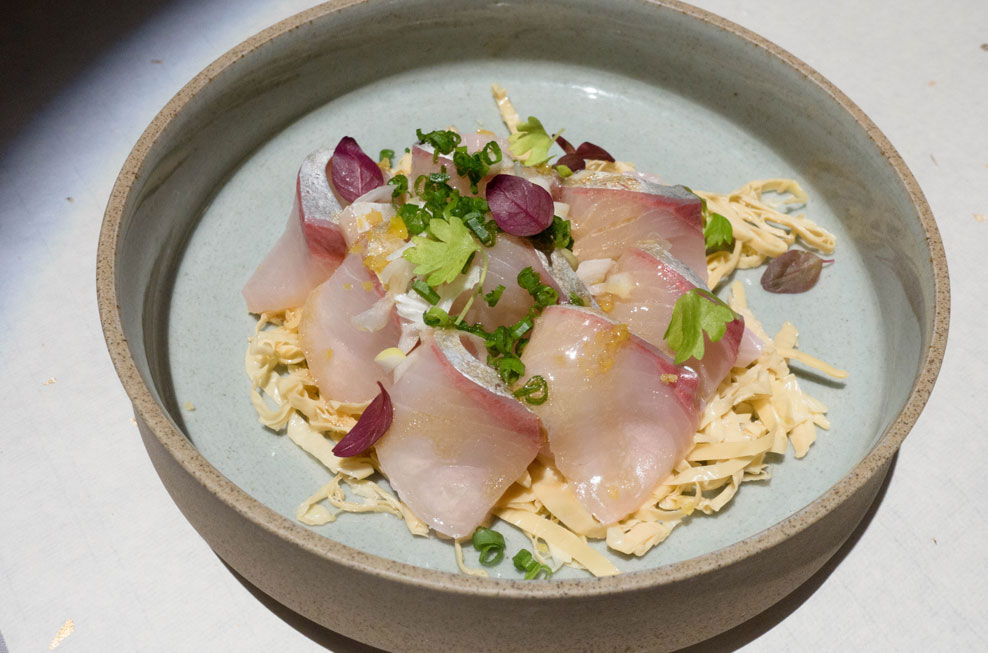 Kanpachi with Homemade Tofu Skin (RMB88) is their most popular dish thanks to a vibrant dressing of lemon juice, sesame oil and soy sauce. The noodle-like shreds of bean curd and delicately arranged curls of pale-pink fish with silver skin soak up all that sauce. 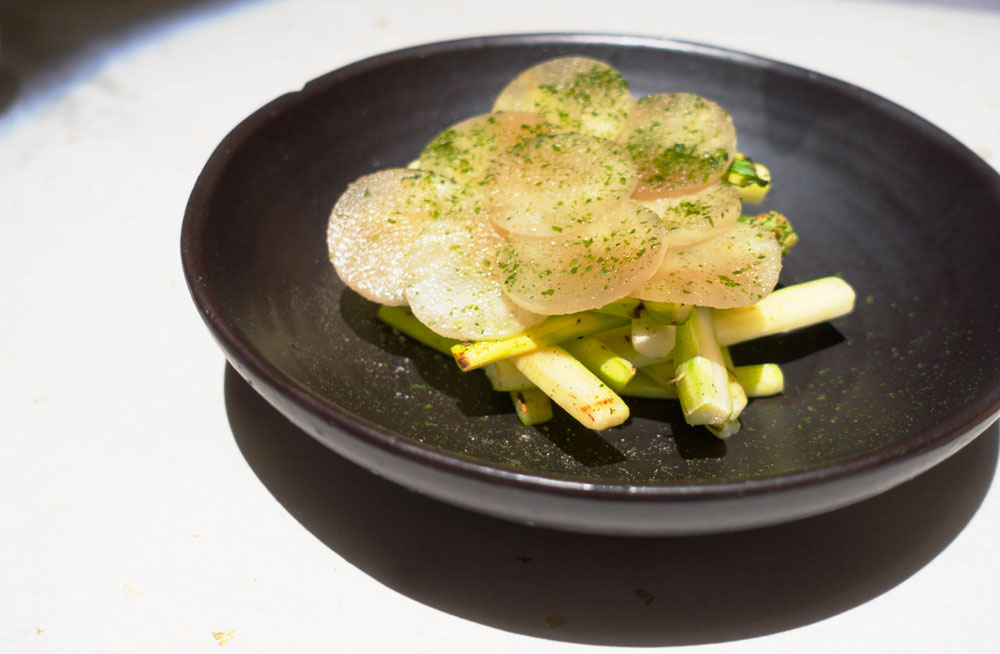 Next up, a Grilled Asparagus (RMB48) log cabin with a roof of circular white daikon tiles houses egg yolk foam. The hollandaise inspired emulsion belies a firm mastery of French cookery while the salty yolk is rooted in Asia. 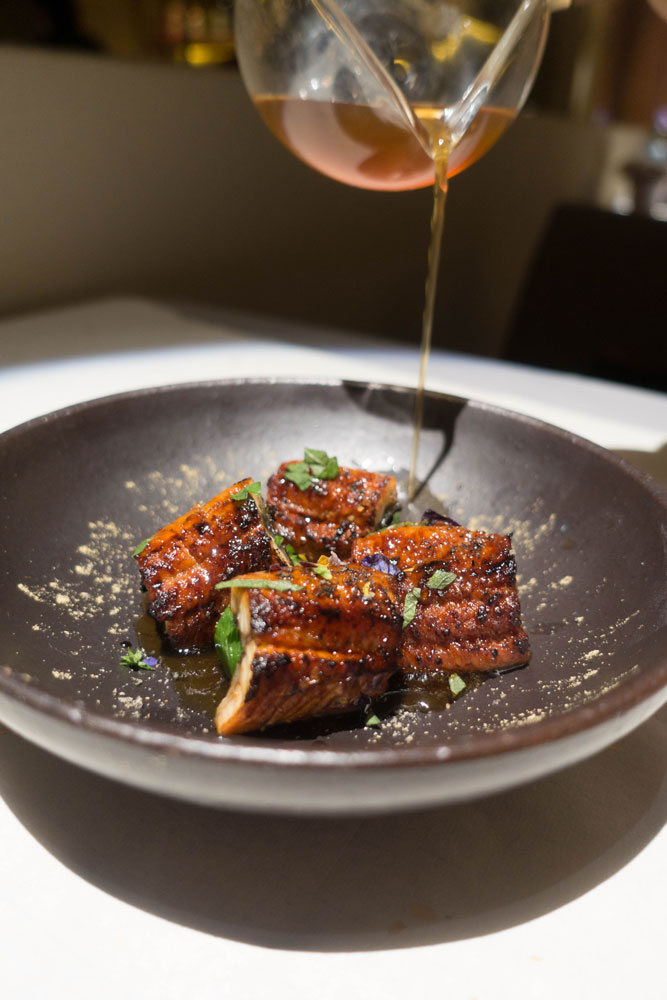 Another important French cooking skill is making stock, and they nail it on the Uzaku (RMB85). Grilled freshwater eel is covered in a delicately sweet tare sauce before charcoal seals the juices beneath a thin layer of crispy skin. The eel sits on an intricately fanned piece of cucumber that shows off serious Chinese knife kills. Eel stock with a generous amount of rice vinegar is poured tableside. 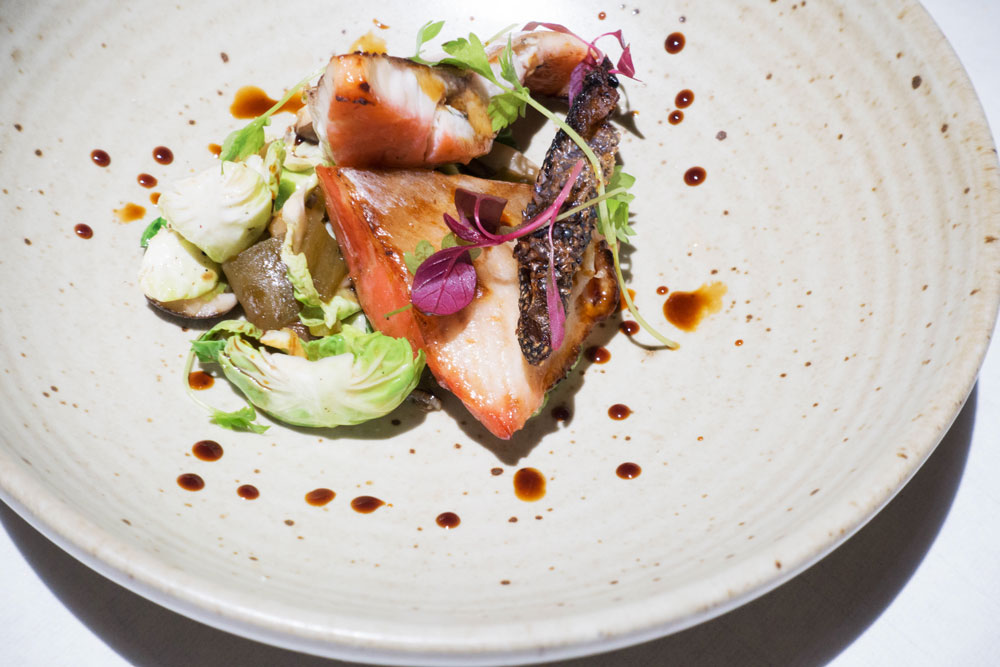 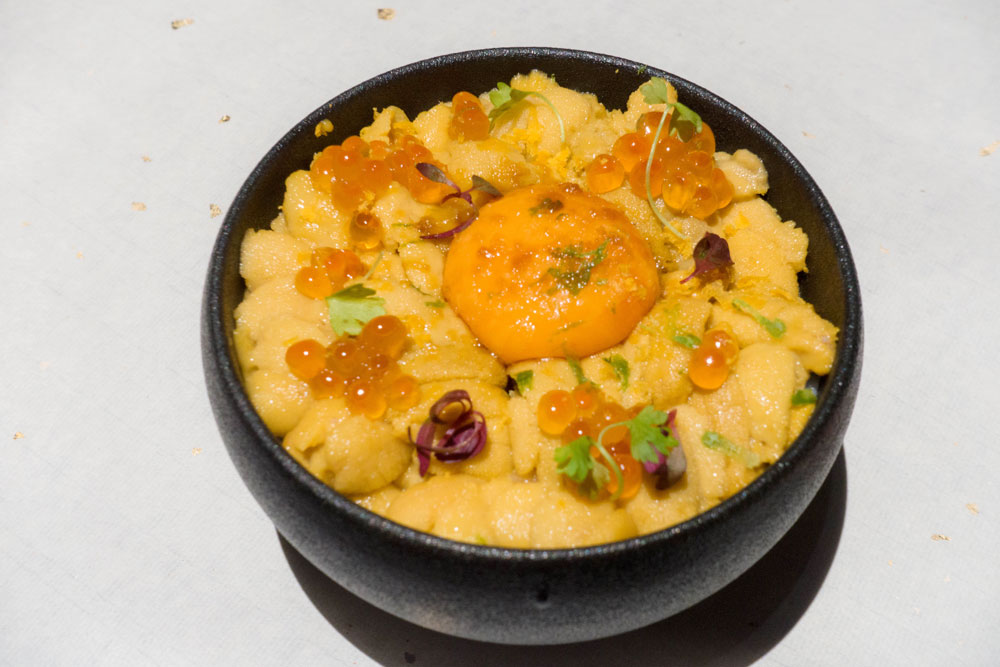 Baked Sanma Fish (RMB58) with slow-cooked black beans and pickled basil and sea urchin sushi rice (RMB260) are both pleasing, although portions are small for the price. Still, if you are the type to swoon at the sight of uni, raw egg yolk and salmon roe, the latter is worth the splurge. 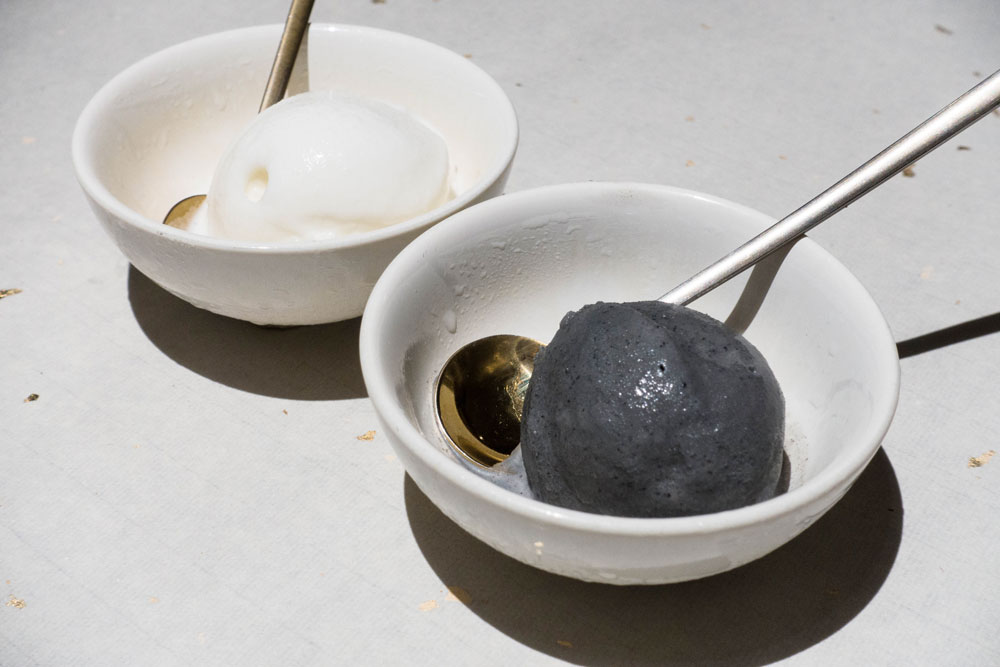 As believers that every good Japanese meal should end with Ice Cream (RMB28 per scoop), we were not disappointed by the black sesame and creamy sea salt flavors.

The clarity with which this chef understands Japanese ingredients is even more impressive when you find out he’s Chinese. It turns out that both he and the owners are locals, and a trip to the ‘Land of the Rising Sun’ was the impetus for starting the Japanese fusion concept in Shanghai.

Just as the menu fuses ideas, the design incorporates Asian aesthetics and Western minimalism neatly bound by the Japanese concept of wabi-sabi. Natural materials like wood and linen are used, while ornamentation is limited to freshly arranged flowers. At one point in our meal, we noticed a single chip in an otherwise perfectly round and beautiful matte black bowl. Our dining companion remarked, “There’s beauty in imperfection.”

Funnily enough, that imperfection memo wasn’t sent to the kitchen. There we find that the addition of aggressive flavors to a typically subtle cuisine is beyond reproach.

Have you been to Azabu Dining? Post your review here for a chance to win a Saucepan voucher.