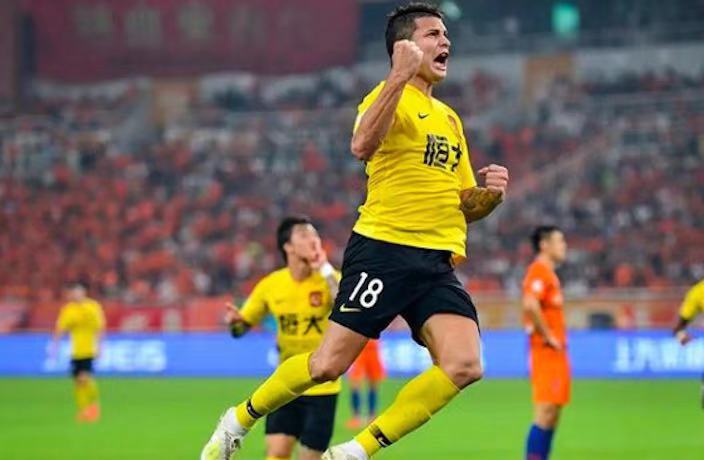 The Canton outfit hammered Shandong Luneng 3-0 in their own backyard; Paulinho unsurprisingly getting on the scoresheet to keep his purple patch in front of goal continuing.

Beijing Guo’an left it late to beat Hebei CFFC, as the Imperial Guards needed 91st and 98th minute penalties to give new boss Bruno Genesio a win in his first game.

Goals courtesy of Wei Shihao, Elkeson and Paulinho fired Evergrande to a 12th successive victory to maintain their four point lead at the top of the CSL.

The game saw a historical goal for Elkeson, who joins former strike partner Wu Lei on top of the all-time CSL goal-scoring rankings with 102.

A five-minute double at the start of the second half put the league leaders on their way to a comfortable victory, but the scoreline doesn’t necessarily tell the whole story, with Shandong left to rue a number of missed opportunities in the first half.

The league leaders punished Shandong seven minutes into the second half for not taking their chances with a slick move. Like clockwork, the pair that combined for the opening goal in Matchday 20 against Bejing Renhe struck once again.

Yang Liyu whipped a wicked ball across the face of the goal for Wei Shihao, who timed his run to perfection at the back post for a simple half-volley finish. Yang Liyu’s 11th assist of the season as the league’s leading creator set up the Wei Shihao for his 9th goal of the season.

Moments later the visitors doubled their lead. A quick one-two between Elkeson and Zhang Linpeng saw the full-back baring down on goal, only to see his shot deflected back out to the Brazilian.

The marksman only needed one touch to set himself amidst a number of Shandong defenders, before clinically curling a left-footed strike into the bottom corner for his 14th goal of the season.

The Canton outfit soon found themselves three goals to the good. As Yang Liyu skipped into the box and cut back a ball from the byline, Paulinho met the ball on the bounce and fired home for his 14th goal of the season.

For large spells of the first half though, it was the hosts who looked the more likely to break the deadlock at the Jinan Olympic Sports Centre Stadium. The young Brazilian Roger Guedes was the most threatening throughout, causing Evergrande all sorts of problems at the back.

Guedes spurned a number of chances in the first half, misses that ultimately proved costly as the game progressed. His best chance came when he was sent through one-on-one with Liu Dianzuo, but the Palmeiras loanee could only prod a tame effort straight at the Evergrande keeper.

Forced to chase the game, the hosts increasingly found themselves open to counter-attacks. Elkeson twice found himself unfortunate not to have made it three after seeing a left-footed 25-yard strike cannon back off the upright.

He could then only fire straight at the keeper after his compatriot Paulinho slid the ball through the channel for a tight angled one-on-one.

Fabio Cannavaro’s side will head into their crucial Matchday 22 game against Beijing Guo’an full of confidence. That makes it three clean sheets on the bounce for Evergrande, who travel to the Workers’ Stadium looking to extend their lead at the top to seven points.

An appalling refereeing display coupled with a masterful showing of the dark arts of football was enough for a resurgent Tianjin Tianhai to hold reigning champions Shanghai SIPG to a goalless draw at the Shanghai Stadium.

Unrepeatable chants echoed across the ground throughout as referee Jing Wang allowed the visitors to repeatedly take their time when the ball had run dead.

Perhaps most telling of all could be the injury suffered by Brazilian superstar Hulk. The former Zenit man appeared to twist his knee after just four minutes before eventually being taken off ten minutes later.

The injury could be anything from a simple jarred knee to damaged ligaments; if it is the latter then the burly forward’s season may have come to a premature end.

Moments later, Marko Arnautovic, on his home debut, had the chance to put his side one-nil up after a Wang Shenchao scuffed shot inadvertenly fell to the feet of the mercurial Austrian.

The GBP22.5 million-pound signing lashed a fierce shot across the face of goal, but Zhang Lu was equal to it and tipped the effort over superbly.

If that save was good by the Tianhai stopper, his save on the hour mark off Arnautovic was sensational.

Lu Wenjun dinked a deft ball in towards the striker who powerfully guided a header destined for the top corner. The Tianjin keeper had other ideas however, acrobatically denying Shanggang with a superb save.

Minutes later, Zhang Lu was at it again, this time smothering the ball at Oscar’s feet. Uzbek international Odil Akhmedov had slid in a gorgeous reverse ball into the path of the Brazilian, but before he could square it to partner in crime Arnautovic for a tap in, the former Liaoning stopper made a fine block.

After letting the visitors take seemingly as much time as they wanted at every opportunity, referee Jing Wang then further angered the home faithful when he brandished a second yellow card for SIPG full-back Wang Shenchao deep into injury time.

It’s now three draws on the bounce for SIPG, and results elsewhere means they slip six points adrift of leaders Evergrande, and also have an inferior head to head record after Evergrande won at the Shanghai Stadium at the start of June.

Two injury-time penalties got Beijing Guo’an out of jail to give new boss Bruno Genesio a win in his first game since taking over from sacked Roger Schmidt.

Renato Augusto stepped up and fired past a despairing Chi Wenyi to give his side the lead in the 92nd minute.

Moments later, Chi Wenyi was adjudged to have brought down Guo’an forward Cedric Bakambu after the Congolese forward was sent tumbling when trying to round the keeper.

Contact looked minimal, but the referee pointed to the spot and gave Guo’an the chance to score a very flattering second.

Bakambu this time stepped up and smashed home to the keeper’s left to add some gloss to the scoreline.

After consecutive league defeats had seen Roger Schmidt relieved of his duties, the lack of cutting edge in front of goal raised its unwanted head once more throughout the 90 minutes for Guo’an.

Renato Augusto had a trio of chances, firstly hitting the post after a wonderful long-range effort. The dynamic midfielder skipped past three static Hebei players in the build-up before looking to curl one into the far corner, but Chi Wenyi’s far post came to the rescue for the visitors.

Just before the hour mark, a wicked corner was met by the head of the Brazilian who, five yards out and unmarked, was unable to keep his header down as it flew harmlessly high and wide.

Hebei’s Ren Hang produced a fine piece of defending moments later to once more deny the Brazilian; making a crucial goal-line block from Augusto after a goalmouth scramble.

Guangzhou Evergrande loanee Fernandinho could, and really should, have done his parent club a huge favor, as he squandered a great early chance to put Hebei a goal to the good.

Xuesheng, in acres of space down the left flank, chipped a delightful ball towards the back post, yet the former Chongqing man pulled his volley horribly wide.

Head coach Genesio was relieved with his side’s late goals, commenting: “In the second half we took advantage and took control of the second half. Finally, we won the game with two penalty kicks, we fully deserved the victory."

Guo'an welcome leaders Guangzhou Evergrande to the Workers' Stadium next time out in a game they simply have to win to keep their tital hopes alive.

A Salomon Rondon brace helped Dalian Yifang to continue their fine form under new boss Rafa Benitez, as they ran out 3-1 winners in Chongqing.

New signing Kim Shin-wook’s seventh and eighth goals in just five appearances wasn’t enough for Shanghai Shenhua, who had to settle with a 2-2 draw against Wuhan Zall.

The relegation six-pointer down at the Shenzhen Universiade Sports Centre ended in spoils being shared between Shenzhen and Beijing Renhe. 1-1.

Guangzhou R&F and Jiangsu Suning played out a 2-2 draw at the Yuexiushan Stadium as Israeli Eran Zahavi’s netted his 24th league goal of the season.

Goals from Sandro Wagner and Johnathan ensured Tianjin Teda breezed past a poor Henan Jianye side 2-0. Former Bayern Munich striker Wagner clearly wanted all the headlines to be around him this week; getting sent off late on after scoring. 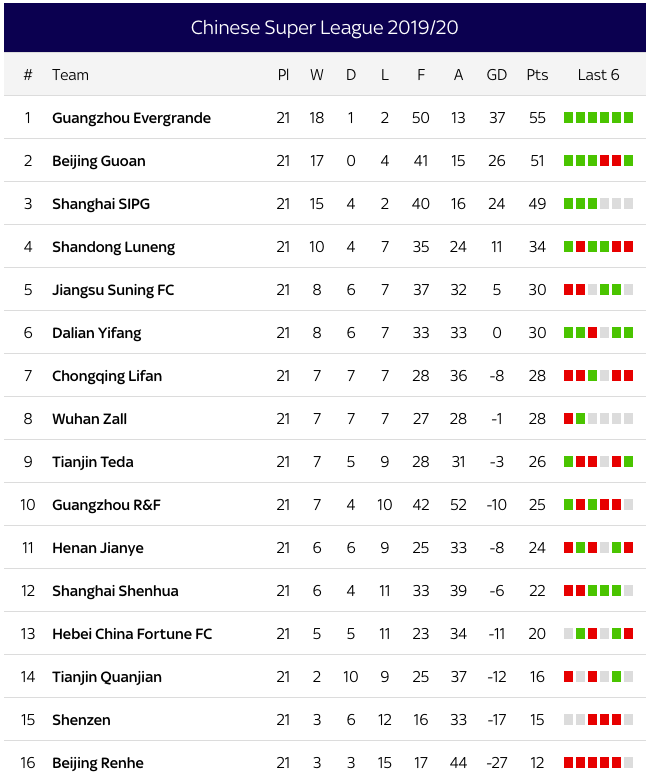