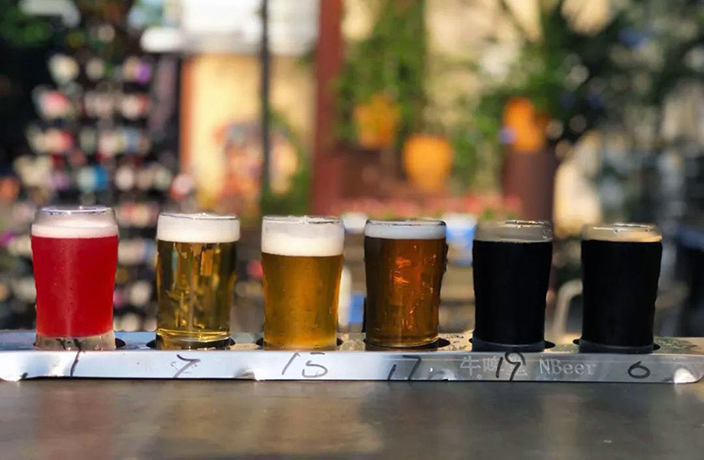 In China, the craft culture is still young, but various cities have planted their flag on the country’s developing craft beer scene. During a recent trip to Shenzhen, it was tastefully evident that good beer was abundant and growing. The craft revolution is alive and well in the South.

The bounties of flavorful brews that can be found in Shenzhen are plentiful, with breweries churning out new products regularly. With the sun shining on the background of a bright blue sky, the Shenzhen brewcation began at NBeer (which has locations in Beijing, Chengdu and Shenzhen) featuring a slew of beer flights, testing all the interesting flavors. The Matcha Tea Green Sour Ale was interestingly thick, savory and herbal, while the Champagne IPA was light and crisp with a touch of citrus. But my favorite was the bright pink Raspberry Berlinerweisse, light and fruity with a touch of tartness, just like drinking a refreshingly alcoholic berry lemonade on a hot summer’s day. Next up was Glass Hammer Brewery, where Head Brewer Gavin Hemple, began his tour of the renowned craft spots scattered around Shenzhen. The Glasshammer beers were mostly traditional styles but focused on doing the classics very well. While the grapefruit coconut milkshake hazy IPA might earn the next 15 minutes of beer fame, brewing classic styles well is the core of what makes beer great. The OG, an English-style bitter poured on nitro tap, has a nutty and caramel toasty taste. Super smooth on nitro with a light to medium body and does not forfeit any flavor while still maintaining a lighter taste.

Next up, the Double Dry-Hopped IPA possesses a fine caramel flavor drawn out by the beer’s incredibly juicy hops. Mango and passion fruit bring this beer together with a bitterness that grows. Loads of hops and malts give this beer a great strong body with a solid balance.

Lastly, one of Gavin’s favorite concoctions, the Chocolate Vanilla Latte Stout, is a medium-bodied stout packed full of rich coffee flavors found in your favorite vanilla mocha latte. Just like the name, coffee, vanilla and chocolate flavors dominate this beer, and the balance between all three makes for very easy drinking. Unlike other rich imperial stouts, this one softly rests on the tongue and goes down awesomely clean and smooth. Be careful while crushing these bad choco-vanilla mammas because at 11% ABV, they delightfully creep up and sabotage sobriety. Getting a chance to chat with Gavin over some of his fantastic brews was excellent. I also learned about beer in China from his point of view. CF: You mentioned you were a trained chef, so let me ask what flavors have you found that accentuate certain beer styles?
GH: Yeah, when I left school I did three years at culinary college and bounced in and out of restaurants over the years. Beer is pretty similar to wine in terms of pairing. You’d either contrast or complement but with beer, you have a lot more versatility, especially with some of the newer beer styles of fruited sours, hazy pales, IPAs and pastry stouts. But for me, you can’t beat some of the classics like a good stout with the fresh ocean flavor of oysters or Nashville hot chicken and an IPA. After a few pints at Glass Hammer and Rich Kat, Gavin accompanied this not-so-weary drinker to Craft Head. There are some great beers and ciders put on by head brewer, Nicholas Clark. Craft Head’s trademark Bucket List Pilsner has a good amount of hop, with a body that stays true to the German style of pils. A bit of passion fruit to balance out a simple biscuit malt base, this is an extremely sessionable lager. Craft Head also developed a range of ciders that tartly tickle the taste buds. The Blueberry Cider was crisp and satisfying, dryer than sweet, making it very drinkable, especially for those looking beyond the realm of beer. Tart with a touch of sweetness, the blueberries are strong with this apple beverage. Nicholas also granted me the pleasure of answering some tough beer questions.

CF: Growing and developing a beer brand can be exhausting but rewarding at the same time. What are the more popular beers that have helped established the Craft Head brand?
NC: We have been quite lucky to start from a base of flexibility, allowing us to brew many different styles of beer and also make cider. Exit Plan IPA, Berry Cider, Ginger Ninja and Pacific Extra Pale Ale are a few that come to mind with their own following. People come to our bar just to drink three or four of them. Cheers to Gavin and Nicholas to introducing this thirsty beer writer to the luscious craft lifestyle of Shenzhen! If ever in Shenzhen, be on the lookout for these venues to discover a tasty beer experience. Thirsty for more beer knowledge? Follow Chris Foste (aka the Bearded Bear) to stay tuned-in to all his Chinese beer adventures!