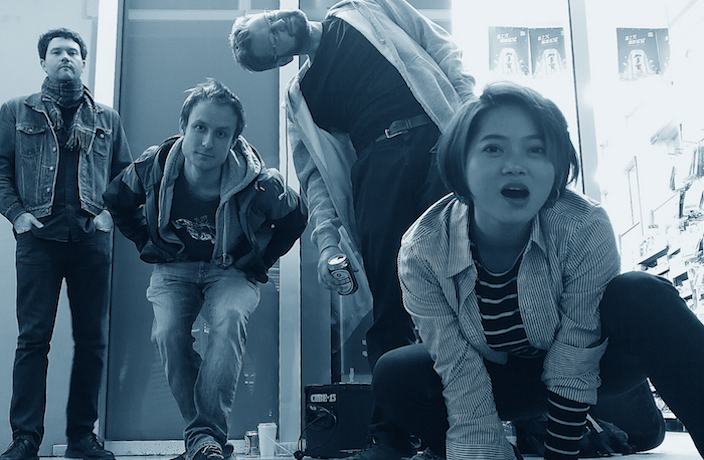 One of our favorite Shenzhen bands Thin City are heading out on a China tour that will take in Guangzhou, Wuhan, Shanghai, Shenzhen and Beijing. They’ll be playing old songs and new tracks from their latest EP, O不OK, and joining up with the likes of Panic Worm, HOO, MOTT and Round Eye as they trek up and down the country.

In that same breath, we were recently told some pretty sad news regarding the band’s future plans. With three of their members gearing up to leave Shenzhen to pursue further studies, Thin City will be going on hiatus for the foreseeable future, but are pretty firmly convinced that they will come back together for tours and music releases down the line. In addition, MOTT, whose Matthew Dowling (also in Thin City) will be heading home to Canada to study, will be taking a similar musical hiatus, although not before releasing a new album.

We caught up with the band’s vocalist and guitarist Graham Wann to chat about Shenzhen, new music and life after Thin City.

Your show in Brown Sugar Jar – Public Live on June 15 is sort of a last bash for now, with Matthew Dowling, Catherine and Simon leaving Shenzhen for a while. What does the future hold for Thin City?
Yeah, that’s right. The ‘TC and MOTT Last Bash it Out!’ show on the June 15 with our pals Huo Hua supporting (along with a screening of the AptArt documentary) will be exactly what it says on the poster, at least in Shenzhen. We’re due to play two nights in Beijing at the end of July before everyone goes packing.

As for future plans, we have our new EP, O不OK, coming out to coincide with our upcoming tour, and MOTT will be launching an album at the same time. We are also working on a full-length album to be released at a future date, and there’s not much point in putting an album out without a band to tour it, so take from that what you will…

Thin City is a very multicultural band, with each of you guys coming from a different country. Can you talk about how you all met?
It was through the late jam night culture that was more prevalent a couple of years ago. Bars with open mic nights that could get a bit wild, like Magma in Baishizhou and the old Craft Head in Shuiwei, were good places where you could turn up and cut loose with a few beers then plug in and try stuff out. So I was doing that, at various times with Simon, Cat and Matt at those venues, and when Matt suggested we try and get a band together, it made sense to get the other two involved. 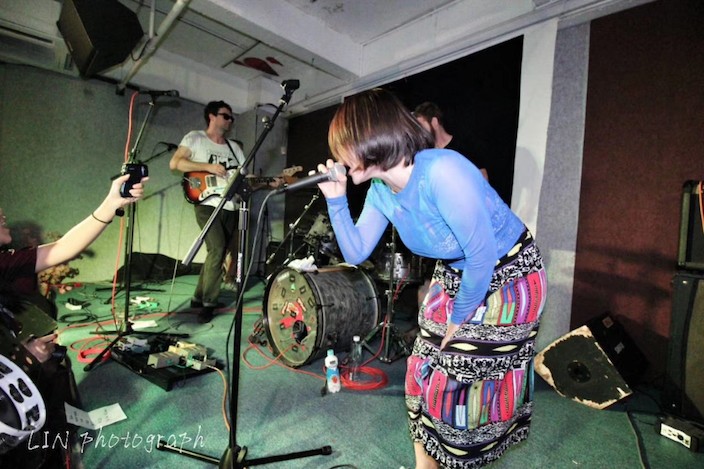 Matt, Simon and I all shared a few influences, so making a sound wasn’t difficult, but we always saw the opportunity that the Chinese/Western/Chinglish culture crossover could allow us, as well as the idea of non-musicianship, and it’s in those areas that Cat lent her talents so well. My only direction to her upon joining was something like, make a collage, and that’s what we went on to do. Multicultural yeah, but more than that, I think we’ve kind of made our own culture.

Can you talk about how life in Shenzhen has impacted the stories that you guys write about and the music that you play?
What I feel gives the city the vibrancy that led to our band’s stories and sound is most likely the diversity of the place. Once you get out of the expensive mall areas and entertainment zones and take a route through the backstreets and urban villages that the city was built up from, you can see real-life experiences by people from all over China, and the DIY-ness of culture on the move that is the very root and inspiration of great art. It’s like no other city I’ve spent time in, in terms of what the Situationists called the derive: meandering around the unmapped territories of Shenzhen and all your senses will be tantalised.

Is Baishizhou really a rock city?

Well the area’s still got rock in its name, so it’s got that going for it. It’s still a great place to go urban-village trekking and has good street food, but I feel that the time and scene that ‘Rock City Baishizhou’ was written about ended with the closing of Magma. But things tend to move around in Shenzhen and I’d say that places that have given me that same feeling recently include the Brown Sugar Jar venues, especially their Public basement bar in Futian, and Craft Head when their jam nights get sweaty.

Can you give some background on the experiences that inspired the song ‘Queen Olga’?
In my early days in Shenzhen I led a pretty nocturnal life and this led to meeting a lot of characters who would naturally find their way into lyrics. The words are quite upfront and I think they’re self-explanatory so no need to delve any more deeply into anyone’s personal business. And one that I hope comes across as sympathetically as I intended, whereas there are others such as ‘Pick-Up King’ from the new EP which are more critical.

What is it that makes modern man feel so unique?
I don’t know, I never got to the bottom of it. Probably something dumb. Douyin, maybe.

If you had to pick between spending every night for a week hanging out at the night clubs at Coco Park or getting picked apart by seagulls on the beach at Dameisha, which one would you go for?
We’re definitely more at home on the beach than in entertainment zone nightclubs, so we’d take our chances with the seagulls.

For this tour, you’re teaming up with some pretty cool bands and playing at awesome venues. What do you guys like most about the process of touring. Any wild tour memories?
Yeah, we’re really looking forward to playing with all the bands lined up so far on this tour. Panic Worm is one of my favourite online discoveries since coming to China and I was gutted to miss Round Eye when they had to drop out of the Shenzhen leg of the Descendents tour recently, so finally seeing those two bands play will be a highlight for me.

I think I speak for all of us when I say that the best things about touring China is eating all the different kinds of food, having a street beer in neighborhoods with more history than Shenzhen and checking out other bands. As for wildness, it’s not really our style once we get off the stage. We’re more content with cracking a few beers and jinjiu (劲酒) with the local bands and punters we meet and getting their take on things.

Who painted the watermelon on the cover of EP, and why did you choose that image for the cover?
That was our Catherine. We were in need of some new imagery one day, so I asked her to do a painting of this kitschy watermelon photograph I had. I’d once used that photo as my phone wallpaper, and I’d heard her singing this line ‘there’s a watermelon on the phone’ on a thing we were working on. That eventually became ‘So Far No Beach,’ a song that started out as a simple tale of getting nowhere in Hong Kong, due partly to me leaving my phone on the bus going over the border. Cat had to phone the bus depot so we could retrieve it, explaining in Cantonese that there’s a watermelon on the phone, to confirm its identity. So it was quite fitting that it became the cover art for EP.

Thin City begin their China tour in Guangzhou on May 31: 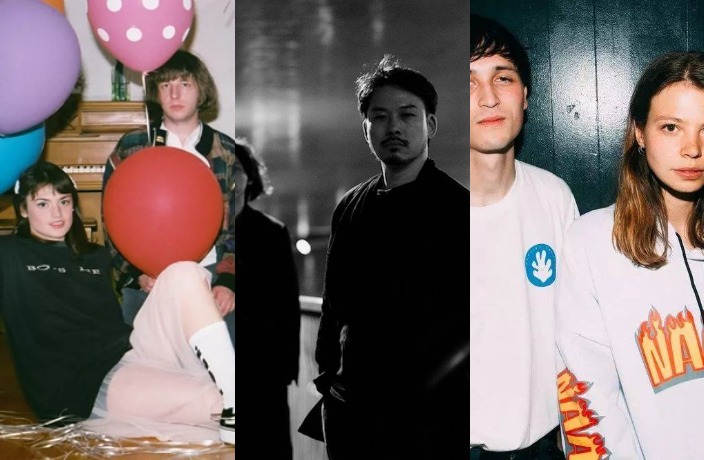 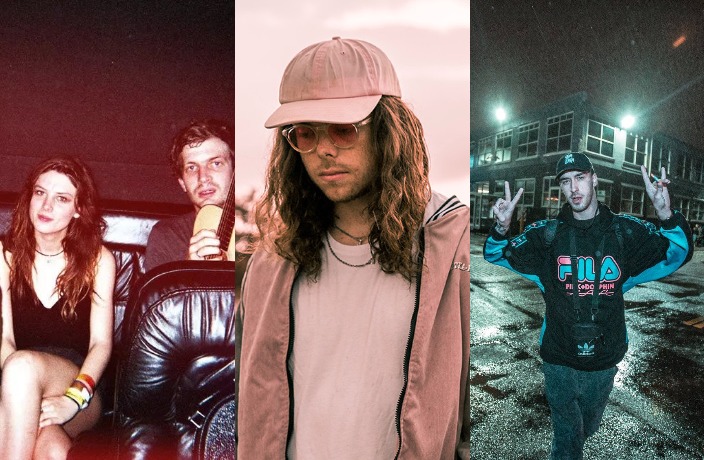