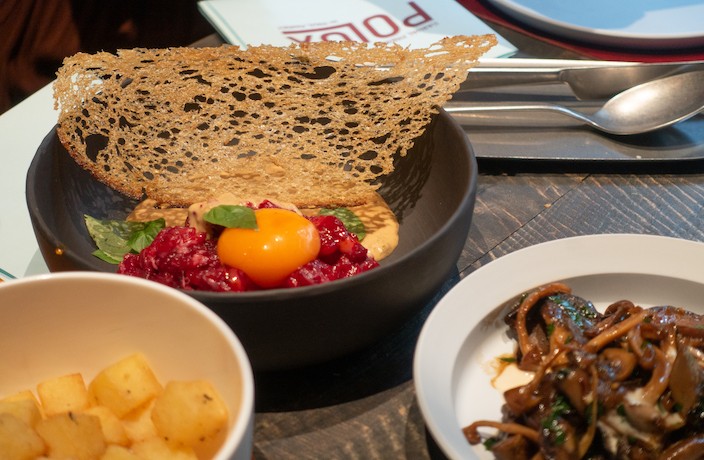 Seemingly mundane dishes such as Sardines on Toast (RMB50) become greater than the sum of their parts when the acidic fish is balanced on soldiers, while Avocado Toast (RMB80 plus RMB10 for an egg) reimagines Chop Chop’s citrus and herb-laden rendition of guacamole for the brunch crowd (and beyond). Piquillo Peppers with Shallots and Olive Oil (RMB50) are dramatically branded by the grill, but we miss the watermelon chunks and basil from its previous iteration. 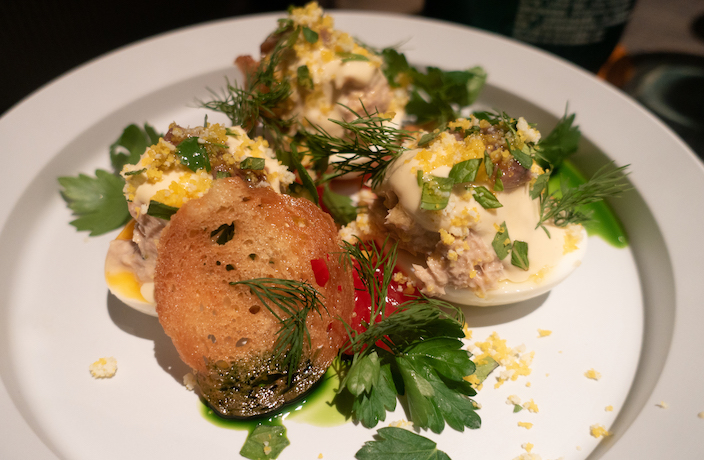 If you like the intensity of pickled anchovies, you’ll love Polux’s version of a Mr & Mrs Bund standard: Egg Mimosa Mama (RMB80). Here, halved eggs topped with a scoop of creamy tuna salad and a single anchovy are outfitted with sweet tomatoes, parsley leaves, dill fronds and generous shavings of lemon zest. Less fishy, but equally delicious is the Roasted Tomato Burrata (RMB80), accented with lemon and basil. 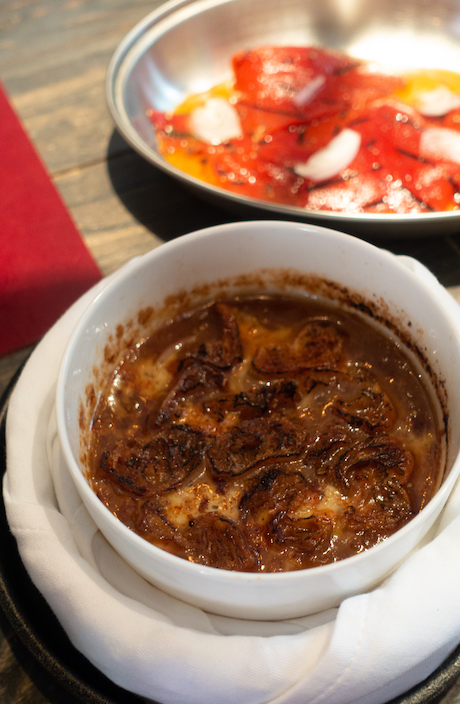 Quintessentially Parisian, the French Onion Soup (RMB80) is a steaming bowl of comforting beef broth laden with silken curls of sautéed onions underneath a crouton and melted cheese cap. 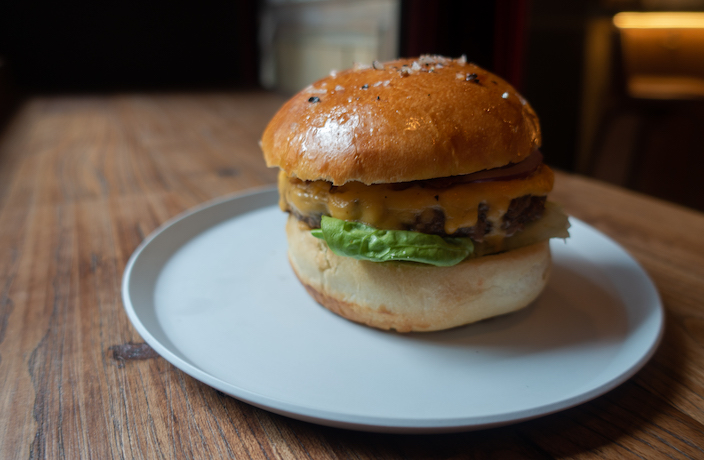 The lusty tune continues with an incredible Beef (or Pork) Burger (RMB110) that sees a juicy patty nestled into a slightly hallowed out bun with melted cheese, crisp bacon, lettuce, tomato and pickle. It’s junk food elevated to its highest potential. 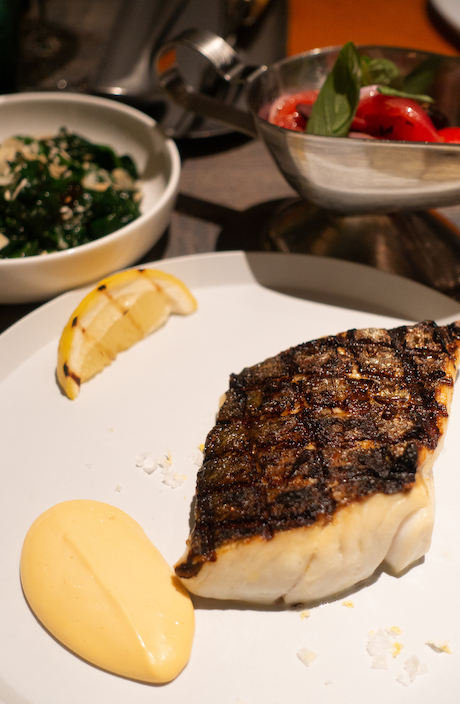 Then there’s the sublime Grilled Sea Bass Vierge (RMB130) accompanied by a vibrant collage of tomatoes and olives marked with a dollop of lightly whipped pastis-flavored aioli.

Dessert is never an afterthought at a Paul Pairet restaurant, and the ‘Real’ French Toast (RMB110) lifted from Mr & Mrs Bund is a single slice of custardy bread encased in a caramelized sugar shell improved delightfully by a barely sweetened scoop of soft serve ice cream. 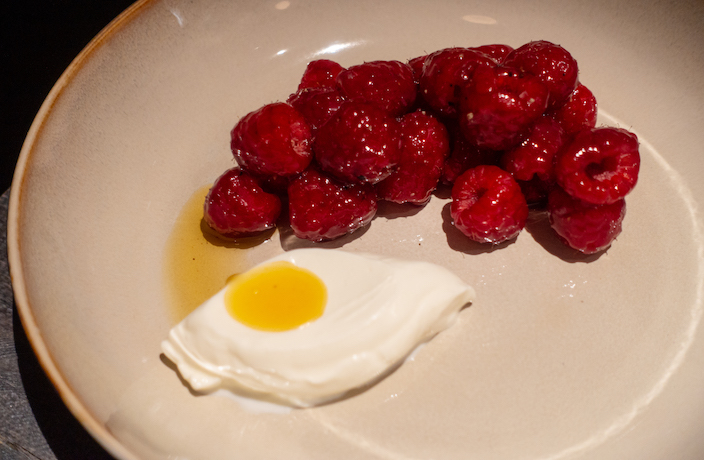 When Chop Chop closed, we thought we’d lost one of our favorites:  Raspberries Essential (RMB90). Happily, the fresh berries coated in sherry vinegar served with creme fraiche and burnt butter made the cut here. Berries and cream might not sound that exciting, but the memory of these flavors lingers long beyond your meal.

Polux has the casual French café look and atmosphere down pat with reclaimed woods, beautiful tiles and exposed brick. Thankfully, they bucked the handsome yet uncomfortable furniture trend in favor of equally good-looking seating that is functional and comfortable (even the stools are cushioned). With lower prices than Mr & Mrs Bund and a convenient location, we see this being a success with both avid Pairet fans and the uninitiated.

Price: RMB200-400 per person
Who's going: a mix of Shanghai-based ‘scenesters’ and Xintiandi tourists
Good for: casual occasions from breakfast to nightcap

Have you been to Polux? Post your review here for a chance to win a Saucepan voucher. 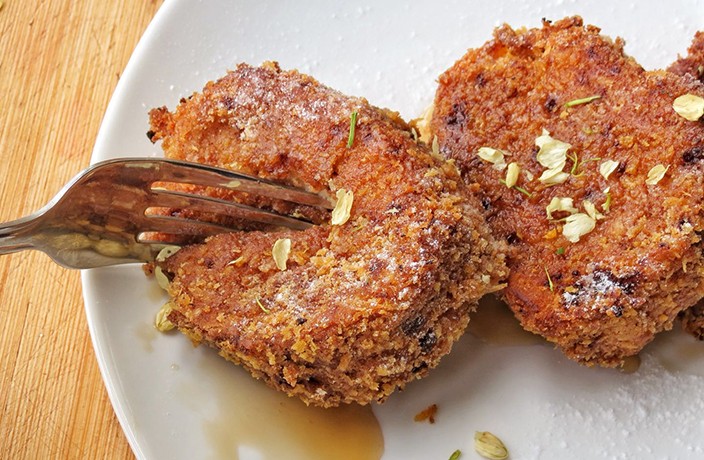