The Mongol Rally is about as different from The Amazing Race as you can possibly imagine. While both involve exotic destinations and overland travel, the latter, for the unaware, is a shitty reality show. The legendary Mongol Rally, on the other hand, is a badass, unscripted and oft-dangerous journey across two continents. It’s cool, and it attracts a motley crew of adventurers and thrill seekers looking to have a rip-roaring good time, see the world and raise money for charity in the process.

The rally’s roots can be traced back to 2001, when Mongol Rally founder Tom Morgan was studying art in the Czech Republic. At that time, according to an interview published in Wanderlust magazine, Morgan purchased a “crap little Fiat 126” and decided to drive to the “most stupid place” he could think of.

“Me and my mate Joolz decided on Mongolia and failed miserably. That was 2001. After that I lived in Russia for a while and learnt Russian, not very well. I started developing the rally as an event, thinking it was something I could do in my spare time,” Morgan told Wanderlust. The inaugural Mongol Rally was officially held in 2004 and saw the involvement of four teams.

Fourteen years later, in 2018, the size of the event was considerably larger. According to statistics published by The Adventurists, the official rally organizer, 332 teams made up of 905 people participated that year. Among them was Zhang Yue, a 34-year-old woman from Harbin, the capital of China’s Heilongjiang province. According to the organizer’s webpage, Zhang, whose English name is Samantha, was the only PRC national to participate in the 2018 rally. 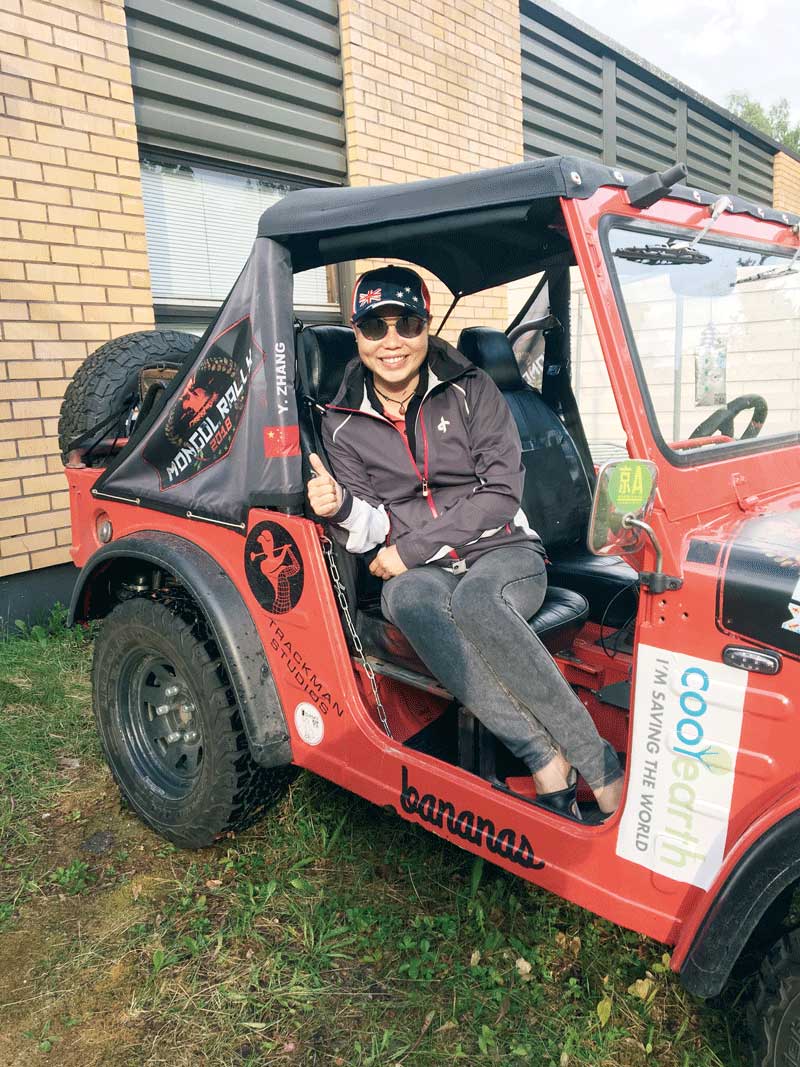 Zhang sitting in the 1983 Suzuki LJ80 that her and Markus Parkkonen used to travel from Scandinavia to Siberia. Image via Zhang Yue

At first glance, Zhang may not look like the rough and rowdy type commonly associated with the Mongol Rally, but behind her kind eyes and soft smile is an adventurous spirit.

Zhang’s journey to Ulan-Ude, the rally’s finish line near Russia’s Lake Baikal, began in autumn of 2017, when she was contacted by a friend, Markus Parkkonen, who was living in Finland. Zhang and Parkkonen knew each other after living as roommates in Guangzhou, and he suggested they reconnect while driving well over 6,500 kilometers from Scandinavia to Siberia. While Zhang was admittedly keen on the idea, her job at the Australian Consulate in Guangzhou and the deposit on her apartment hung in the balance. These two things, above all else, factored into her decision on whether or not she should participate in the rally. 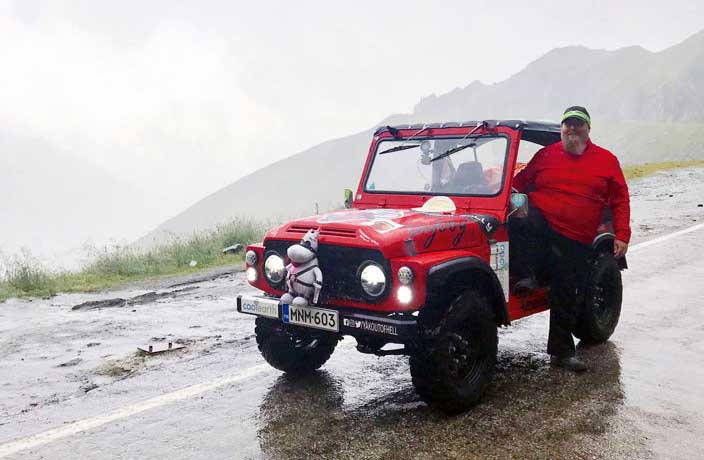 Parkkonen and the Suzuki LJ80. Image via Zhang Yue

“It’s not very easy to find a good job. Jobs are everywhere, but finding one that pays well and you’re passionate about isn’t easy,” Zhang tells us on a cold December afternoon, as she recounts her adventure over a glass of wine. “I also had to talk to my landlord because I still had six months left on my apartment. I had to consider that I might not get my deposit back.”

It took her until mid-April to commit to the adventure, and several additional months to tie up the loose ends of her life in Guangzhou, where she’d lived for nine years. On July 6, 2018, Zhang boarded a plane bound for Helsinki, and a week later, Zhang and Parkkonen were on the road, cruising towards Prague in a 1983 Suzuki LJ80.

“It was a piece of shit,” says Zhang of the vehicle, which would end up breaking down over 30 times throughout the journey.

The 2018 Mongol Rally’s launch party, which was held on July 15. Image via Zhang Yue

Once in the Czech Republic, the duo met up with the other participants in the 2018 Mongol Rally for the event’s launch party on July 15. There were speeches, food and more than a few beers, and ralliers camped out in what Zhang describes as an abandoned amusement park. The following morning Zhang and Parkkonen, along with other teams, departed for Hungary.

She was all pumped up until they reached Budapest, where the adventurers had to wait six hours while a mechanic repaired their vehicle. Then, Zhang hit her first diplomatic snag at the Romanian border, where she was refused entry to the country due to her lack of a proper visa.

“Oh my goodness, Romania pissed me off,” says Zhang. “They turned me away because I had a single-entry Schengen visa, but Romania is not part of the Schengen visa area, even though it is part of the European Union.”

The issue forced Zhang and Parkkonen to detour to the nearest Hungarian town with a Romanian consulate. “The visa center was empty, so the consul general issued me the visa himself,” Zhang tells us.

Up next for the duo was Turkey, a country that Zhang recalls fondly for its scrumptious cuisine and friendly folks, whom she describes as “very helpful.”

“Our car broke down again on the uphill section of a mountain road and we were stuck there for a couple of hours. We were hoping someone would pass by and be able to help us, and eventually a middle-aged man driving something similar to a tractor stopped and helped us figure out the problem,” says Zhang. “It was the oil filter. Eventually our car started and we were able to drive for two hours to a service station.”

“Be ready to overcome any unpredictable physical and mental obstacles... and get your papers sorted properly beforehand”

From Turkey, the duo traveled to Georgia – where they had to deal with stray dogs and scavengers – and then to Azerbaijan. Parkkonen drove through Turkmenistan, but, unfortunately for Zhang, she was unable to secure a visa to enter and was forced to fly from Azerbaijan to Uzbekistan. Zhang waited a week for her travel buddy to arrive in Uzbekistan, which, interestingly enough, is one of the world’s only two doubly landlocked countries (with the other being Liechtenstein).

“Eventually we met in Uzbekistan, and he arrived with an Irish team and one other team,” says Zhang. Together, the ralliers drove to see one of the greatest environmental catastrophes of the modern age: the Aral Sea.

A forgotten vessel sitting on what once was the bottom of the Aral Sea. Image via Zhang Yue

Over the past five decades, it has transformed from the world’s fourth largest lake into a vast desert dotted with smaller bodies of water. The Aral Sea’s disappearing act is the result of river diversions for poorly thought-out agricultural projects undertaken by the Soviet Union, and has been dubbed “one of the worst environmental disasters of the world” by former UN Secretary General Ban Ki-Moon.

“It was amazing but sad,” says Zhang of the barren landscape that’s replaced the lake. “What have we done to nature? It only took us 50 years and now the lake is gone.”

The ralliers spent two hours exploring the area from the Uzbek side (the lake – or what’s left of it – also crosses the border into Kazakhstan), before piling back into their Suzuki and driving to the ancient Silk Road city of Bukhara. And from there, Zhang and Parkkonen beelined it for Tajikistan, where the duo cruised the legendary Pamir Highway, which follows the Pamir Mountains through Afghanistan, Uzebekistan, Tajikistan and Kyrgyzstan.

“We drove along the Afghanistan border and got very close to China near Lake Karakul,” says Zhang, adding that the snowy scenery was “stunning.”

Unfortunately for Zhang, all good journeys demand hardship of some type, and while driving through Kyrgyzstan she got a double dose.

“When we crossed from Tajikistan into Kyrgyzstan, I started to feel cold and came down with a fever (possibly due to a spoiled sausage she’d eaten earlier). Then, three or four hours after crossing the border, we ran into a landslide that had blocked the road,” Zhang tells us. “The authorities did a pretty good job of removing the rocks, but while we were waiting, I was shivering and didn’t even want to talk. When we arrived at our hostel, I stayed in bed for two days.”

With the ‘Land of the Mongols,’ and the finish line in Ulan-Ude, drawing ever nearer, Zhang and Parkkonen again parted ways due to visa issues, with Zhang flying to Novosibirsk, in Siberian Russia, to wait for Parkkonen as he drove the LJ80 across Kazakhstan.

Russia left a lasting impression on Zhang. “I love it. Although we don’t speak the same language, everyone [in Russia] is willing to help you, or you can tell they are willing to try.”

The finish line in Ulan-Ude. Image via Zhang Yue

Parkkonen pulled into Novosibirsk, which is the third largest city in the Russian Federation after Moscow and St. Petersburg, four or five days after Zhang arrived. From there, the road lead to Irkutsk and Lake Baikal, the world’s deepest lake and largest body of freshwater by volume. Opposite Irkutsk, on the eastern side of Lake Baikal, the duo pulled into Ulan-Ude, the rally’s endpoint, on August 22. (Ulan-Ude is located in Siberia, just over 580 kilometers north of Ulaanbaatar, Mongolia, which was the rally’s former finish line, before 2015.)

When asked what advice she’d offer to other folks looking to participate in the rally, Zhang had this to say: “Get your mindset in the right place, be ready to overcome any unpredictable physical and mental obstacles and face the challenges. Also, get your papers sorted properly beforehand, and lastly, enjoy the trip.”