This is part of our "Portraits of China: A Collection of Stories From China's Past" series. Read more about the Dai ethnic minority group in Yunnan here and the last ladies with bound feet here.

Lasting from 1937 to 1945, the Second Sino-Japanese War was a result of Japan’s aggressive imperialist policy. As China’s Nationalist army fought against the invading Japanese forces, ordinary people suffered horrific repercussions.

During this time, China saw some of the most gruesome events of modern warfare, most notably the Nanjing Massacre – a vicious mass murder of residents in the provincial capital of Jiangsu. Though this was the most infamous episode during the war, similar atrocities occurred elsewhere.

One such tragic event was the Panjiayu Massacre, a brutal and devastating attack carried out by the Japanese army in a village located in Hebei province during the Chinese New Year in 1941. Throughout his travels, Hack met with two of the last living witnesses to the terror brought on that fateful day. 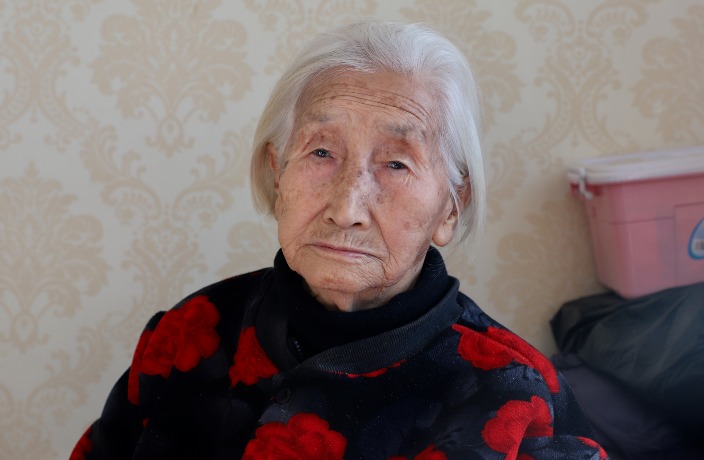 “I am one of four survivors left who saw terrible things in this village, as most of the other survivors have since died. I still have nightmares about these things. I was 10 years old when the Japanese suddenly came to our village. It was two days before the Spring Festival. They stayed for just one day, but that day completely changed my life forever.

They killed my mother, my two sisters and my only brother. My sisters were just 2 and 3 years old and my brother was only 4. I can still remember them clearly and miss them to this day. My father and I were the only ones to survive, but amongst all the chaos I lost him. Luckily, I was found by an old man who was my next-door neighbor. When he found me, my clothes were on fire. It was a very cold winter and we were wearing many layers of clothing, so luckily the fire didn’t reach my skin. But there was no water and he had to put the fire out in order to pick me up and carry me to safety, so he urinated on my clothes, told me not to cry and to stay as quiet as possible before picking me up and taking me into the mountains. I was so scared.

"They stayed for just one day, but that day completely changed my life forever"

I saw many terrible things that day. Anyone who stayed at home was killed. They didn’t care if you were a man or woman, young or old – they just wanted to kill people and they did it in the most horrific way. They wore green uniforms, they had mustaches, they had bikes and cars and long guns with knives on the end, which made it hard to fight back as we had nothing. People tried anyway, but it didn’t work. I don’t know how many there were exactly, but there were lots of them. They killed and then they left. After they were gone, I returned to see the destruction. People were unrecognizable as they were all just black bodies with no hair or clothes.

My dad and the man who saved my life survived. I also called him dad. I am forever grateful for his help.”

“Our village is surrounded by mountains and [the Japanese] suddenly came over the top. I was standing in the doorway of our house and that's when I first saw them. Our village has a stage and they told everyone to come down to watch a performance, and that's when the killing started. They had piled wood under the stage and set it on fire, burning people to death. If anyone tried to run away they were caught and then killed instantly.

I remember my mother holding me in her left arm and my older brother in her right arm. That’s when he was killed by a bullet in the center of his chest, fired from a Japanese gun. My mother dropped him and ran away with me to find somewhere safe to hide.

I was just 4 years old at the time. My brother was only 6 years old and I don’t really remember him very well. My brother's body was burnt alongside many other adults and children, so we were unable to find him afterwards. My mother found a pile of dead bodies, and that's where she laid down with me in her arms. We were pretending to be dead and she told me not to cry, not to talk and not to move so we wouldn't be detected by the young soldiers.

After the Japanese had finished killing, I saw them walking around looking at what they had done. They kicked the dead bodies and sometimes stabbed them again, looking pleased. They killed more than 1,200 people in one day, but my mother, father and I survived. My dad was shot though, in his left shoulder frighteningly close to his heart, and was left just inches from death as a result.

"We were pretending to be dead and [my mother] told me not to cry, not to talk and not to move so we wouldn't be detected by the young soldiers"

Afterwards, my mother gave birth again and my parents often spoke about my older brother to keep his memory alive. I married when I was 20 years old. We were both farmers. My wife died six years ago after falling ill. I miss her. We had happy times together along with our four girls.

This year I am 82. I like to smoke, I still like to work outside, and in the summer, we grow lots of grapes. I still think about the terrible things I saw that day. I’ll never forget.”

This Day in History: The Shanghai Racecourse