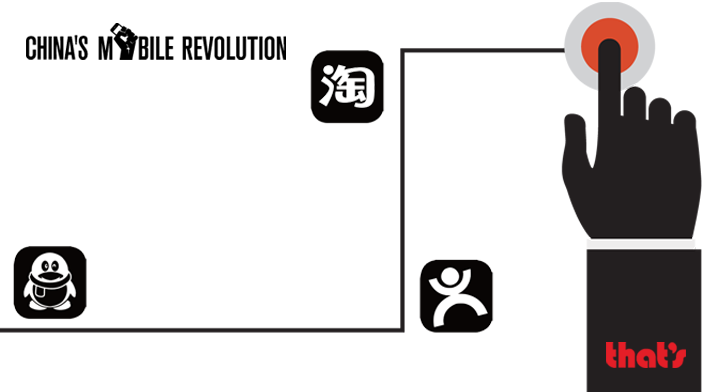 In the June Issue of That's Shanghai and That's PRD, we've looked at how cellphone culture has taken over China. In the second of this five-part series, we look at modern mobile phone culture. Read about social commerce here, China's most popular apps here, a history of mobile phones here and an infographic on apps here.

Over fifty years ago, Canadian philosopher Marshall McLuhan predicted a world condensed into a tightknit community by electronic technology. In this ‘global village,’ as he called it, information would move “instantaneously from every quarter to every point at the same time.” Living at the speed of light, he figured, would encourage a heightened sense of responsibility among humans.

Today, McLuhan’s forecast sounds like common sense. We know the stakes of releasing a photo into cyberspace, and aren’t surprised when a political candidate is shunned because of one controversial tweet. Life is unfolding before us, but it’s only validated if it’s online. We rely on the internet 24/7 to run errands, connect with friends or access information. Our mobile phones, always reliably at our sides, are our passports to the global village.

Nowhere is this truer than in China. Cut to any street corner in the country and see severe cases of phone fixation; people consumed in the alerts illuminating their oversized screens instead of the very real traffic lights in front of them.

Currently, China ranks No. 1 in the world for number of mobile users – around 90 percent of people in the PRC own mobile phones, three-quarters of which are smartphones. For the average wage earner, a phone is an affordable, all-purpose device that’s more convenient than bulky tablets or laptop computers. More than two-thirds of Chinese citizens have shopped using their smartphone, compared to an average of just 32 percent in countries like the US, the UK, France, Spain, Australia, Russia and Brazil, according to reports from PayPal.

Multiply those statistics by a population of nearly 1.5 billion and China’s mobile commerce ‘revolution’ looks more like a tsunami poised to annihilate outdated infrastructure and make way for the new.

So what exactly is mobile commerce? Anyone who has made an online purchase is familiar with e-commerce, which refers to transactions made electronically over the Internet. M-commerce is a subset of that – activity conducted using a mobile device. This could be as simple as buying a sweater on Taobao’s app, scanning a QR code to receive a discount at a restaurant or purchasing movie tickets with Baidu’s mobile wallet.

More than just shopping with a smartphone, however, m-commerce is also about going “online to offline” (O2O), or bringing mobile users to physical storefronts. Although Tech in Asia rightly called it “our industry’s stupidest acronym,” O2O describes a concept that may reverse the fate of crumbling brick and mortar establishments in an e-commerce age.

“A lot of people in the West think Chinese O2O means virtual showrooms and all sorts of Buck Rogers futuristic nonsense, when in fact it’s just physical locations doing everything they can to hang onto smartphone-obsessed consumers,” explains Ernie Diaz, the publisher of China Digital Review based in Beijing.

According to Diaz, m-commerce growth will primarily benefit brands and organizations that have a healthy, physical presence in China. Banks, movie theaters, restaurants and hair salons are among those racing to capitalize on the trend by parading digital coupons and developing efficient mobile services.

As Chinese society increasingly morphs to fit the shape of m-commerce, it’s hard to recall a time when red envelopes were actually gifted by hand instead of forwarded to friends over WeChat. The transition has occurred more or less overnight, and yet, with Chinese Premier Li Keqiang introducing an “Internet Plus” strategy this year and mobile companies unveiling some of the most affordable 4G plans in the world, it’s not hard to see why.

Access to mobile networks has never been easier, and everyone from Beijing officials to farmers in fourth-tier cities is on board. This past April, Chinese e-commerce leader Alibaba teamed up with state-owned China Telecom to sell inexpensive phones to rural citizens in an effort to boost mobile commerce. Each handheld device came pre-installed with Taobao, of course, along with four months of free 2G data service.

Even without support from such initiatives, finding an affordable phone in China is about as challenging as locating a KFC. Domestic brands like Xiaomi, Huawei and Lenovo ensure there is no lack of competitive alternatives to pricy models from Apple and Samsung.

Getting a cheap phone in China is as easy as finding a KFC.

With more smartphone-equipped citizens every day, China’s need for trustworthy, efficient mobile infrastructure has sparked innovation in areas like online shopping and mobile payments. Gaining internet users’ trust is crucial to converting them into online customers, and sites like Taobao and Jingdong have tackled the problem with comprehensive rating systems, detailed product descriptions and photos – lots of them. Whereas sites like Amazon or Etsy average about two images per product, the standard on Tmall is to display shots from at least ten different angles. Moreover, communication between Chinese merchants and customers is instantaneous. Unlike the Ebay seller who takes a day to respond, vendors on Taobao are available to chat 24 hours a day, 7 days a week. If mobile users can be described as anything, it’s on the move. Seamless on-demand service is continuously refined by users’ ever-increasing expectations.

“E-commerce here is more advanced than in the rest of the world,” he says. “Payment services are escrow, so you don’t actually transfer the money until after you receive the goods.”

Risk is marginal – sites like Tmall grant users a full week to return an item, no questions asked. Since the money is held by a third-party during that time, customers can cancel an order and be promptly reimbursed without ever confronting the merchant directly.

As Alibaba, Tencent and Baidu invent simpler, more reliable mobile payment options, even middle-aged ayis are taking a break from dancing in the park to load up their digital shopping carts. In 2014, more than 15 percent of smartphone shoppers in China were over the age of 40, according to China Internet Watch.

More shocking, however, is the range of financial investment services springing up as mobile apps, like Yu’E Bao and Baifa, which offer higher interest rates than traditional banks.

“A lot of our best people are working on finance sector products. Baidu is even developing a system of loans available via mobile,” says Kuo, adding that it’s still too early to talk specifically.

Mobile loans? Investing money via private apps instead of state-owned banks? This doesn’t sound like the nation infamous for its state-directed capitalism. Perhaps the Chinese Dream has arrived after all. Or maybe m-commerce is starting to inspire change at a fundamental level.

Last year, China met its slowest period of economic growth in decades. As factory workers pack their bags to seek higher-income jobs in cities (delivering Taobao packages, perhaps), the manufacturing sector has ceased to pump out record profits. Future growth will come primarily from domestic expenditure. Everyone, including the Chinese government, understands the viability of m-commerce in sparking consumer spending.

“(The government) knows that Bank of China and all these stodgy SOEs don’t have the innovation or the necessary resources to match Tencent and Alipay in terms of payment systems,” Diaz says. “I’m sure they’ll let them keep it competitive, but I don’t think they’re going to do something backwards in that regard and try to stifle them.”

In addition to sowing the seeds for a consumer-driven economy, m-commerce has also kick-started growth in rural areas. In the first half of 2014, 58 percent of online purchases in China came from mobile devices registered in lower-tier cities, according to a report by Morgan Stanley. With more rural towns and villages going mobile, opportunities for O2O are bound to grow, giving mom-and-pop stores a shot at profiting from the age of QR codes and WeChat promotions.

Like most fads in China, m-commerce is riding a wave of novelty, though it’s too early to gauge how far it is from shore. Generating $1.9 billion in 2011, the Chinese m-commerce sector is estimated to hit $450 billion by 2016 – about the size of Singapore’s total GDP. And that number is only predicted to climb.

In a few years, traditional sectors like education, health care and real estate will likely have a much greater presence on smartphone screens. The notion of visiting a bank or grocery store will feel as archaic as taking selfies without a stick.

Yet no matter how far we creep into this global village, life off-screen will continue as before. Relationships blossoming on Tantan will ultimately be tested face to face. Ice-bucket challenges, even when viewed in HD, will always feel chillier in reality. Our planet will continue to revolve around the sun – well, until there’s an app for that.

Xibo – The Best of Xinjiang Without the 6-Hour Flight