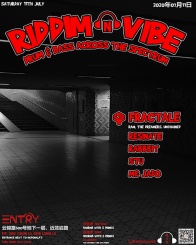 Fractale are a drum and bass trio based in Italy and China. After officially joining the dnb scene in 2014 with their first release on RAM Records, they have actively been producing and playing since then. Counting releases on RAM Records, Vandal Records, The Dreamers Recordings, Unchained Recordings and RSTLSSNSS. Resident DJs in Italy for the BAD VIBES collective and part of the SWEATSHOP Crew in China, they have played alongside artists such as Black Sun Empire, DJ Marky, Shimon, London Elektricity, Danny Byrd, The Prototypes and Cyantific. Featured on BBC Radio 1, DJ Mag Italy, DJ Mag Spain and Drum&Bass Arena 2016.