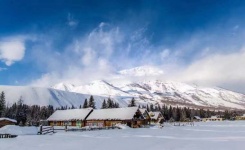 汗德尕Handaga play soaring Mongolian folk music that is both timeless and timely.
This seven-piece, formed in Kanas, Xinjiang, are rising stars of China’s folk-rock circuit, bringing to that popular ‘Inner Mongolian’ folk sound a ringing clarity and improvisational flair.
Their songs seek vast horizons, like the grasslands and roaming elk of their homelands in Inner Monglia, and weave between restlessness, melancholy and yearning. They conjure images of home, their home - the sparkling Irtysh river, flowing down from the Altai. With horse head fiddles, strings, and throat singing, there’s an echo of the ancient in their songwriting – a call that rings out across generations, a defiant vision of another life in another time.
Their 2019 self-titled album is the sound of a group reveling in the joyous polyphont of their traditions, and yet straining to break free of it. On songs like 走马 (‘Ride a Horse’), the old and new collide in a restless soundclash, the song ending in a rousing, anth