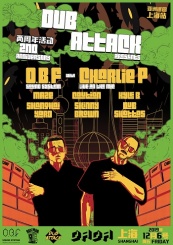 Dub Attack
For Dub Attack's 2nd anniversary, they have invited one of the biggest names on the current dub music scene in Europe, O.B.F Sound System from France and singer/mc Charlie P from the UK…