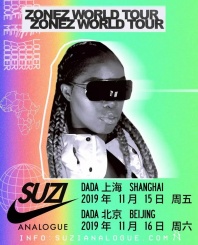 Suzi Analogue is a rarity within modern-day electronic music: a prolific black woman singer, songwriter, beatmaker and creator of Never Normal Records who draws from house, footwork, rap, reggae & film to make conceptual music that amplifies her special personal stories.
True to her name, Suzi releases much of her music on formats like tape & vinyl on Never Normal Records, which have found success from the Billboard charts to BBC Radio playlists & places like Boiler Room to New York Fashion Week shows, like the widely-celebrated designer CHROMAT S/S18 'Serenity' collection for which Suzi composed the live score.