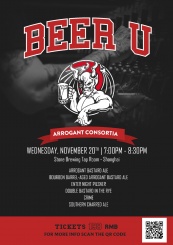 As the alter ego and sister brand of Stone Brewing, Arrogant Consortia is known as the crusader raging against tyrannical mediocrity. Arrogant Consortia beers are bold, aggressive, and badass, produced specifically for those who love assertive beer, antagonistic metal, hard-hitting rock, and sticking up a middle finger to the status quo man. For the 11th edition of Stone Beer University at 7PM on November 20th, dive face first into the underworld of Arrogant Consortia beers with six pours (5oz) of unbridled draft and bottle brews for 198RMB. Sign up online using the QR code to secure your spot ahead of time or purchase tickets directly at the Tap Room. Beer nerds and noobs alike are welcome.