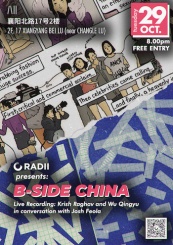 Comic book artist Krish Raghav and designer Wu Qingyu join Radii China’s Josh Feola for a free discussion at All Club this month. Both Raghav and Wu have added a visual element to music in China. Following a live discussion and audience Q&A, you can hang out and listen to some choice cuts from the Beijing underground rock scene from 1999-today. There will also be a limited edition print version of Krish Raghav and Josh Feola’s Hang on the Box comic for the music/zine nerds out there!

Map of All Club