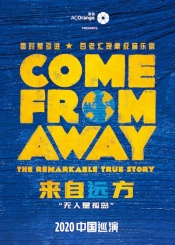 The longest-running Canadian musical in Broadway history, Come From Away, is coming to Shanghai. The musical, which was a critical and box office success during its run on Broadway, tells the story of what happened when 38 international airplanes and more than 7,000 passengers were forced to land in Gander in Newfoundland after the September 11 attacks in 2001.