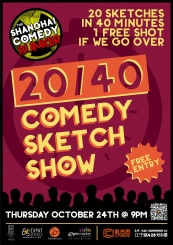 On Thursday October 24th the Shanghai Comedy Bunker hosts a FREE comedy sketch show at CAGES Bar and Sports. 20/40 aims to deliver 20 hilarious sketches in 40 minutes, with the audience deciding what comes next, be it a sketch, song, mime or magic trick. If the performers fail to complete the 20 in 40, they must buy shots for the audience. Win/win.

Shanghai Comedy Bunker sends thanks to sponsors 247tickets.com, The One Executive Suites - Shanghai, Epermarket and Expat Services for their support.