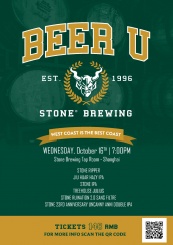 It’s time for a West Coast vs. East Coast throwdown to uncover which American coast brews the tastiest beers! For the 10th edition of Stone Beer University on October 16th at 7pm, we will match up various IPAs from around the USA, evaluating the similarities and differences in brewing styles, flavor, mouthfeel, and ingredients around the country. For 148RMB, sample six distinct IPAs (5-ounce pours) from Stone Brewing, Jiuhuar, Treehouse, and other fantastic American breweries while deciding which coast’s brews reign supreme. Sign up online using the QR code to secure your spot ahead of time or purchase tickets directly at the Tap Room. Beer nerds and noobs alike are welcome.