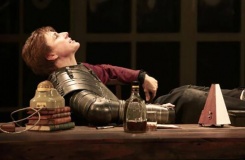 You can check out Shakespeare's classic production of Hamlet right here in Shanghai from September 21-22. The play will be performed by Brazil's famed Armazém Theatre Company at the 1862 Theatre. The tragedy was completed in 1602. The story of Hamlet is the story of the destruction of an established order. Hamlet, the protagonist, is on a rampage against his uncle, the man who killed his father in an attempt to take over the throne and marry Hamlet's mother. Since it was first performed, Hamlet remains one of the most performed and influential plays of all time. If you've never seen it before, make sure to check out this one-of-a-kind performance.

You can purchase tickets here.

Get Your Tickets to See Shakespeare's Classic Production of Hamlet