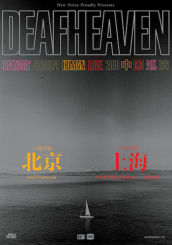 Deafheaven, who have left an undeniable footprint on modern metal, will play Bandai Namco on November 20. Described by Rolling Stone as a “boundary-pushing blend of black metal, shoegaze and post-rock,” Californian post-metal five-piece Deafheaven combine screamo vocals and pounding drums with surprisingly melodic guitars to mesmerising effect. Following on from their critically acclaimed 2018 album Ordinary Corrupt Human Love, which featured the Grammy-nominated single ‘Honeycomb,’ the band’s China tour promises to be something very special indeed.