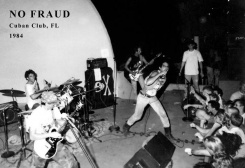 Florida, a province in the United States known for its idyllic beaches, retirement communities, Meth addicts, and Disney World, will export to the People's Republic of China one of its finest and most treasured hardcore punk bands of the 1980s movement; No Fraud.  Since 1984, the band with its legendarily wild and frenetic live shows have released several stunning EPs such as 1986's The EP and full length albums such as 1987's Hard to the Core and have shared stages with acts such as Suicidal Tendencies, Circle Jerks, Bad Brains, M.D.C., Agnostic Front and tons more.

Their debut tour of the mainland hosted by Hesher Has Culture and will include 8 sweaty stops beginning in Beijing and ending in Shanghai with Shanghai's adopted punk sons Round Eye, Shanghai punk veterans Loudspeaker, The Flood, and The Molemen.  This is a rare treat so come out, get crazy and welcome the genuine articles of 1980s hardcore; No Fraud.