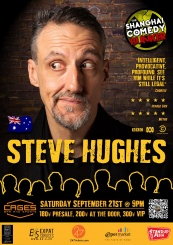 Internationally renowned Australian stand-up comedian Steve Hughes is coming to Shanghai!
Hughes tells it like it is – confronting, alarming and always hilarious. The convict wizard with worldly insights into the bleeding obvious comes armed with more issues than an occupy movement.  The inimitable ex-heavy metal drummer has been burning up the international circuit for the past 10 years, he has toured throughout Europe, Australia, USA, Canada & New Zealand to rave reviews and mutinous laughter.

On TV he has recently performed stellar sets on Live at the Apollo and Michael McIntyre’s Comedy Roadshow (BBC One).

Steve Hughes will be performing with the Shanghai Comedy Bunker at Cages Bar & Sports on Saturday 21st September.