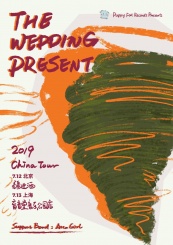 We are thrilled to report that Leeds-based British indie rock legends The Wedding Present are coming to Chinese mainland for the first time. They have had eighteen UK Top 40 hit singles and are the first band of the hugely influential C86 Scene to play in China. Over the years their music has evolved from fast-paced indie rock in the vein of their most obvious influences The Fall, Buzzcocks and Gang of Four to more varied forms. Throughout their career, they have been led by vocalist and guitarist David Gedge, the band's only constant member, of whom John Peel said “The boy Gedge has written some of the best love songs of the Rock ‘n’ Roll Era. You may dispute this, but I’m right and you’re wrong!” Having recently played a packed show in Hong Kong, we welcome them back to these parts on their mini-tour of Shanghai and Beijing.