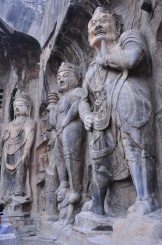 More than a century ago, stone Buddhas in North China, including those at Longmen (Luoyang), became an object of fascination among elites in the United States, Europe and Japan. The stone Buddhascame to symbolize the urge to resume human connections long lost. As new precious commodities, they found their way onto the world markets, but also at the same time awakened imaginings of cultural bonds spanning continents. How did it happen? This talk introduces a circle of privileged Americans and Japanese, such as Ernest Fenollosa, Okakura Kakuzō, Charles Lang Freer, and Langdon Warner, who passionately promoted Chinese stone Buddhas as a form of art. Their seminal effort helped spawn transcultural connections and borrowings that still today stimulate reverence for a common global heritage.