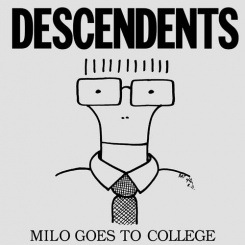 The Descendents are coming to China. Anyone who reads the previous sentence and doesn’t want to run to the nearest mosh pit or mug of coffee is in dire need of a crash course in “punk 101”.

The Descendents, who formed in 1977, are the earliest pioneers of US pop punk and have been at the forefront of the west coast hardcore punk movement since its genesis in the late 1970s. Founding drummer, Bill Stevenson, is one of the most recognizable and respected drummers of the genre having played for Black Flag during their most daring and genre bending years.

He and singer Milo Aukerman whose cartoon-y portrait adorns most of Descendents iconography (and an infinite number of tattoos), guitarist Stephen Egerton, bassist Karl Alvarez have made it their mission to remind the legions of fans that have followed in the wake of their massively influential debut LP “Milo Goes to College” that punk is and will always be dangerous, spontaneous, defiant, fast, emotional and most of all fun. Green Day,