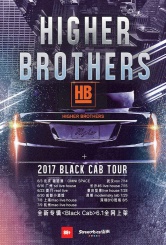 Chengdu's leading rap foursome comes to Shanghai on the back of the album tour for their acclaimed debut record, Black Cab. Smart and catchy tracks like "WeChat" and "Made in China" have been garnering Higher Brothers major acclaim in both China and internationally. See the group behind the hype at Mao Livehouse.