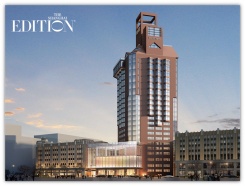 Ian Schrager’s vision of The Shanghai EDITION is a new kind of hotel the city didn’t know it needed. World-class architects, designers, chefs, mixologists and artisans have come together to craft this one-of-a-kind, modern gathering hub combining all aspects of Shanghai’s culture in one, resulting in an innovative landmark with dining, recreational, business and entertainment destinations.

The Shanghai EDITION is located in central Bund area at the northeast corner of  Nanjing Dong Lu. It is the core of the historical and cultural landscape of the Bund and the origin of “Old Architectural Complexes," which features a large number of old Art Deco buildings of the 1920s and 1930s.

The development of The Shanghai EDITION comprises a refurbishment of two of those finest buildings. One was the former headquarters of Shanghai Power Company, built in 1932. This Art Deco building makes up the public area of the hotel, including the magnificent lobby, Michelin-starred Chef Jason Atherton’s new restaurant, Shanghai Tavern, and a world-class spa as well as multiple bars, night club, rooftop and meeting areas.

The other refurbished building was the East China Electrical Power. The main building has 145 rooms and suites and is accompanied by an array of dining spaces, including HIYA, a new Japanese restaurant by Jason Atherton on the 27th floor and Shanghai’s stylish incarnation of Punch Room, the sophisticated cocktail lounge first made famous at the London EDITION, a bright indoor swimming pool overlooking East Nanjing Road on the fifth floor and a 24-hour gym on the seventh floor.

Map of The Shanghai EDITION

10 Best Nightlife Events in Shanghai This...