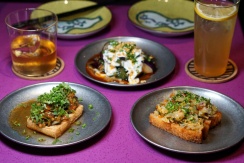 Positioning themselves as modern-day food rebels without a cause, Bastard owners, Chef Michael Janczewski (Juke) and Jiro H (previously of Bird and Bitter) want to be the antithesis to everyday Chinese street food. The aim is to create a trendy Chinese eatery with sharing plates, natural wines and house-infused highballs – a purely experimental concept, and the kind of place they themselves would choose to hang out at.

Michael’s unfettered cooking style pairs contrasting regional Chinese cuisine, distorting it further with a mix of traditional and Western cooking techniques that can be interpreted differently by each person filling one of the space’s 30 seats.

It’s not that disdainfully scorned ‘f-word’ that chefs flee from of late – fusion – whispered in disgust brought on by its overuse. Rather, it’s all about the whimsical coupling of modern Chinese tastes in a playful way that just works.