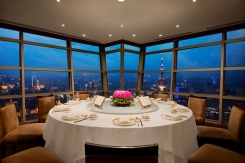 Club Jin Mao is located on the 86th floor at Grand Hyatt Shanghai of the Jin Mao Tower, which is one of the most prestigious Shanghainese restaurants in the city, offering exquisite and authentic cuisine while creating an elegant and sophisticated dining experience.

With spectacular views overlooking the Shanghai skyline, Club Jin Mao is designed around traditional Chinese elements and contemporary abstract patterns.  The restaurant has six private rooms, with the largest capable of seating up to 40 guests.  Each of the private rooms is named after a Chinese figure and is complemented by miniature tower decorations.

Chef de Cuisine Beck Chen leads the talented culinary team at Club Jin Mao.  Originally from Shanghai, Chef Chen has more than 20 years of professional culinary experience, specializing in Shanghainese cuisine.  He joined the prestigious Club Jin Mao in 1999 and has since received many international culinary awards.  He has also showcased his culinary skills at other Hyatt hotels.  As the restaurant chef de cuisine, he not only focuses on the quality and flavor of dishes, but also pays close attention to the latest industry trends.