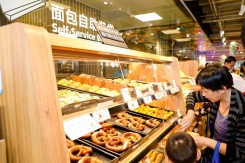 ALDI’s story began in the German town of Essen in 1913, where the Albrecht family started their grocery business. Throughout the century, ALDI has grown from a small family business into an international retailer, with over 10,000 stores around the world serving millions of customers in over ten countries across four continents.

The international retailer with German roots entered the Chinese market in 2017 through its flagship store on Tmall Global, followed by its Tmall Flagship Store in 2018. In June 2019, ALDI opened its first two pilot stores in Shanghai’s Jing’an and Minhang districts, marking its first physical presence in China, and launched its WeChat mini-program at the same time.

ALDI aims to be a neighbourhood grocery store in support of its customers’ dynamic lifestyles, and the new locations offer an in-house bakery serving freshly baked pastries as super butter croissant, egg tart and German pretzel, which make for a convenient breakfast item or a midday snack. Turn it a complete morning meal or light lunch by pairing it with brewed-to-order coffee and tea including classics such as americano, latte and flat white, as well as iced coconut latte and Sri Lankan peach apricot tea.