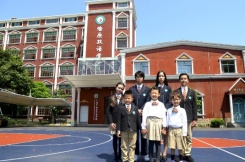 LYBS is one of the few schools in Shanghai that has successfully integrated the Chinese National Curricula and IB PYP Framework, in addition to its course delivery as a bilingual model.

The school has received a number of commendations from IBO, such as it has a high level of understanding of IB PYP, and it maintains effective communications between different parties including parents and faculties.