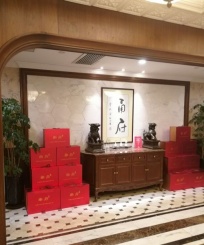 Yong Fu is a fine dining restaurant mainly serving wild Zhoushan seafood. From the cooked food to the environment and service, Yong Fu redefines, by its own exemplification, what can be called upscale Ningbo cuisine. The elegant surrounding has every bit of its details described brilliantly for the profundity of Chinoiserie – retro elements apt to be stale are transformed by the designer to be lucid and bright, while displayed paintings, calligraphies and potteries give an ethereal prospect of misty and drizzly Jiangnan.

Top-grade Salted (Qiang) Crab: in Ningbo dialect, Qiang, to stir-fry then cook with sauce and water, has a meaning of Yan, to pickle or to salt. The top grade red crab of Zhoushan is selected and pickled (Qiang) with salt, wine and a little sugar, so the crab meat remains something ‘raw’ – crab roe tender and smooth, crab meat salty but with a bit sweetness, a typical meal going well with rice.

Wild Tidal Shrimps: Ningbo is beside the sea. At high tide, shrimps near the seashore are normally seen jumping with the tides, thus those being caught are named tidal shrimps. Shrimp shells are thin and crisp, shrimps meaty, so whether roasted with beer, cooked with sundried cabbages or in chicken wing soup, all are invariably delicious.