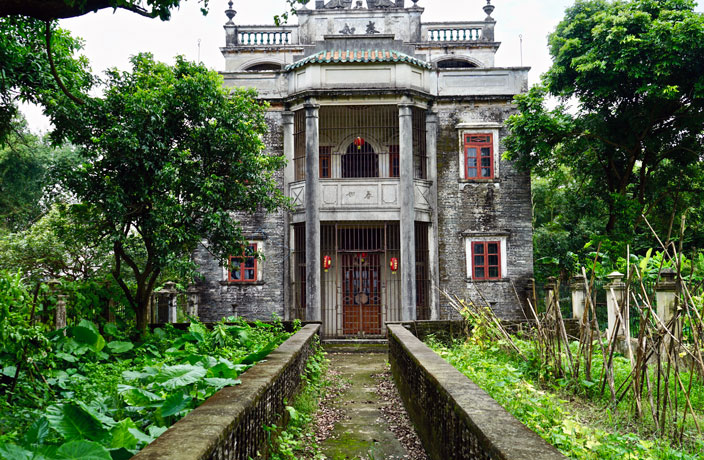 The southern Chinese province of Guangdong is, at present, anyway, home to two UNESCO World Heritage Sites – one cultural heritage site and one natural heritage site. The storied settlement of Kaiping, a part of the prefecture-level city of Jiangmen, serves as the province’s sole cultural heritage site, and its architecturally sublime homesteads and watchtowers attract large groups of domestic and overseas tourists each year.

Officially registered with UNESCO as the Kaiping Diaolou and Villages, the sights most frequented by tourists are without doubt the old village of Chikan (currently undergoing redevelopment or, perhaps, restoration work – depends who you talk to) and the diaolou clusters at Zili, Jinjiangli, Sanmenli and Jianglong. (For the unaware: Diaolou are eclectically designed, fortified multi-story residences and watchtowers made of concrete.)

When we first visited the area several years ago, we’d heard the tale of an abandoned village named after the North American country situated above the 49th parallel: Canada. (Geography nerds may note, only four Canadian provinces actually border the US along the 49th, but we’re taking creative license with this one.) 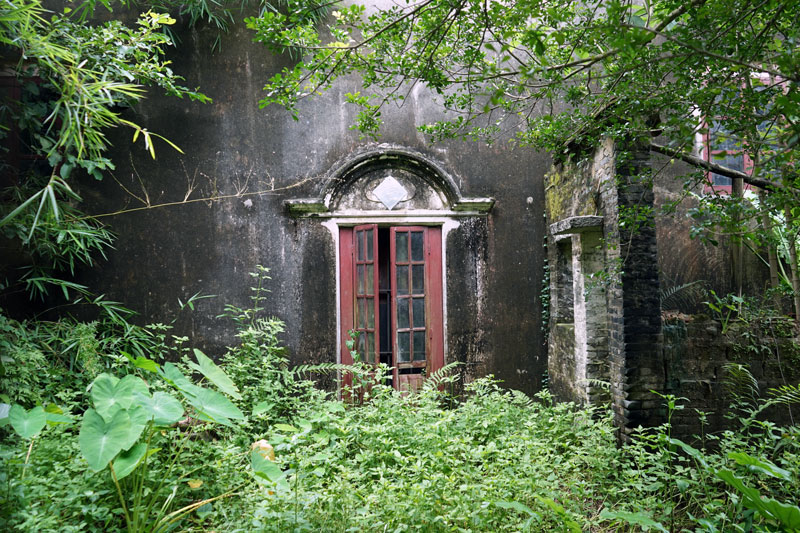 “It’s called Canada Village because most of the original inhabitants left the area for Canada,” Rocky Deng, a hotel, art space and restaurant proprietor in the town of Tangkou, tells us over a late-night beer on our most recent visit. “The whole village is empty, maybe only one or two families still live there and there might be a security guard on-site – but that’s it.”

Deng, who had previously lived in both Hong Kong and Vietnam before moving to Kaiping in 2010, adds that there are lots of beautiful – albeit decaying – old residences left behind by their inhabitants in the 1960s and ’70s, when many people left the area for the lights of the big cities on the Pearl River Delta or the promise of a new life overseas. Deng, whose parents are originally from Huadu in Guangzhou, first visited the area in 2004 and opened his hostel slash art space slash restaurant – known as Tk-Space – in 2016.

Longtime Kaiping resident Kaiyi echoes this sentiment, telling us, “The people moved out of the diaolou to the big city or to other countries.”

Naturally, we are intrigued by the idea of an abandoned, historically and architecturally significant village named after the Great White North, so we channel our inner Dr. Jones, hop on rental bikes and set out for Canada Village.

Without precise coordinates, we make our way from Tangkou to the tiny village of Lingyuan. As we’ve come to expect in Kaiping, the journey to our off-the-beaten-path destination provides us with serene, picturesque views of sprawling rice paddies and weathered diaolou. 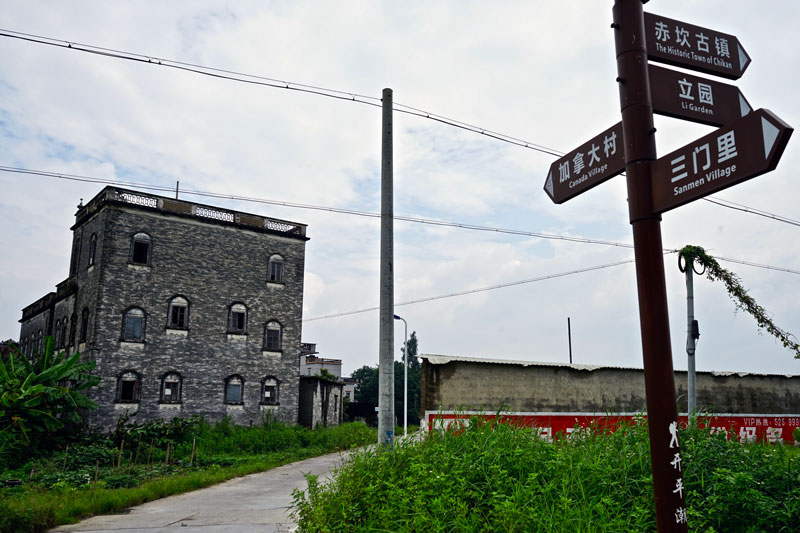 As we cruise through Lingyuan, an elderly man shines a toothless smile as he directs us up the road. Somewhere between the villages of Xiacun and Xiacunxincun, we’re greeted by an arrow-shaped sign reading ‘Canada Village.’ The relatively new-looking post to which it is attached is perhaps one of the many touristic enhancements that have appeared here in recent years, as eyes from around Guangdong and Greater China turn their sights on the once-unsung gem that is Kaiping.

A few more twists and turns, past a duck farm and several derelict buildings, some inhabited and others all but crumbled, and we reach a narrow dirt path surrounded by flooded rice fields – the single entrance and exit to Canada Village. 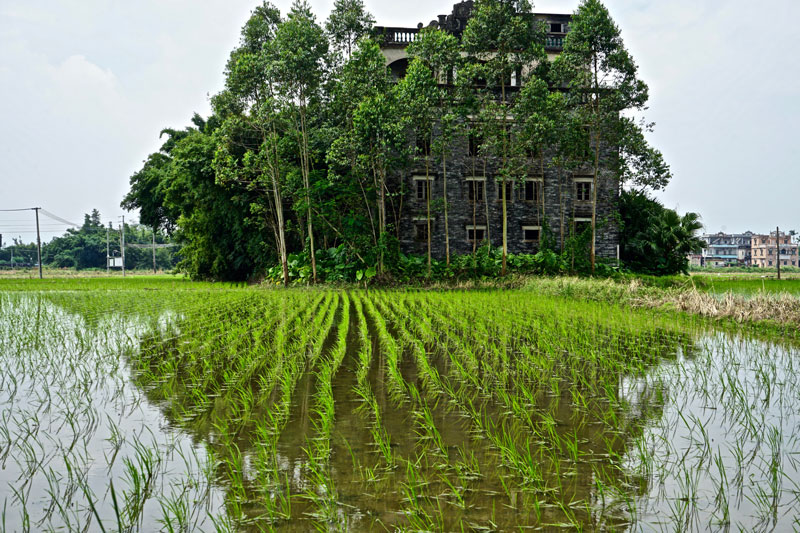 Possibly the only still-inhabited structure in Canada Village. Image by Jesse Pottinger for That’s

Ahead of the overgrown cluster of mansions, an impressive grey brick structure stands alone among the farmland. If any of the buildings here are still occupied, this may be it. The remaining houses – a dozen or so – line the left side of the trail, mainly in tight-packed rows of two. Stunning Canadian- and European-inspired architecture is the dominant design feature of the mansions, accented by traditional Chinese text and magnificent details, from floral patterns and nature scenes to fictional winged creatures. 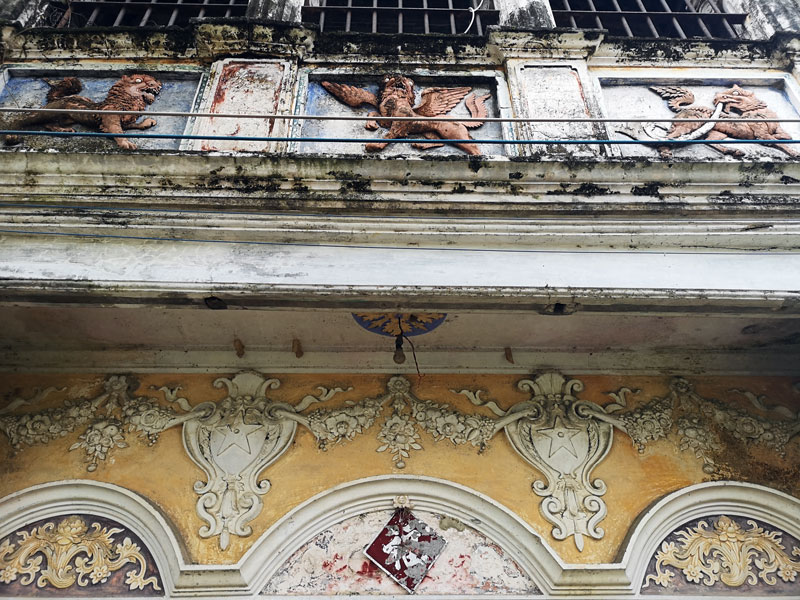 Decorative features on a building in Canada Village. Image by Jesse Pottinger for That’s

Shrouded in vegetation, the narrow alleyways from the main path lead to the second column of buildings, each with an overgrown courtyard surrounded by mossy brick walls that – wobbling with the slightest nudge – seem ready to collapse.

Hoping to sneak our way inside one of the mansions, we investigate every corner of the small area. Unfortunately, despite the village’s near-total abandonment, every window and door on the decades-old homes remains bolted or locked shut. 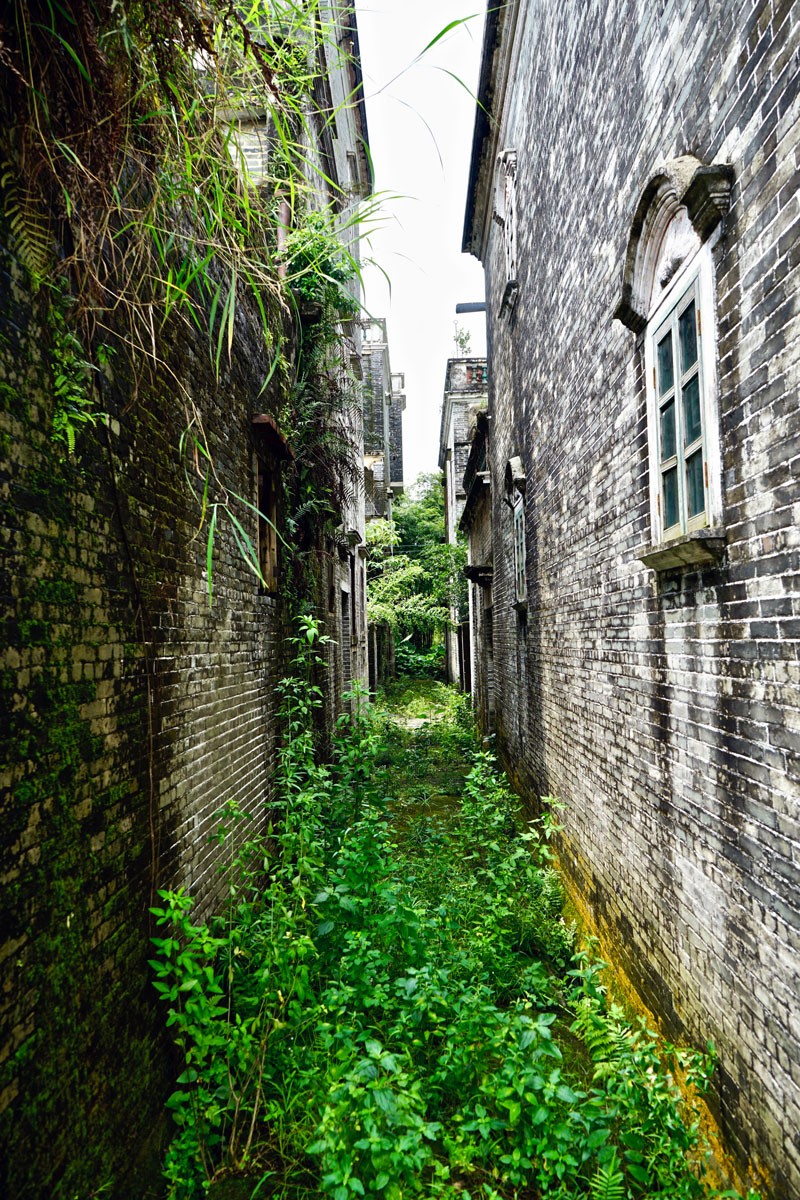 A forgotten laneway in Canada Village. Image by Jesse Pottinger for That’s

In the distance, the village’s lone diaolou, an imposing five-story concrete tower and the tallest building here, rises in isolation from its neighbors. Standing at the base of the fort-like edifice in all its grandeur, we’re reminded of Kaiping’s glory days, when its purpose was not to impress, but to protect the village’s residents. While we have no way of being entirely sure, it’s possible the abandoned tower may be the oldest diaolou of them all.

“Opposite Canada Village is the oldest diaolou structure, dating back to the Ming Dynasty,” Deng tells us, prior to setting out on our cycling adventure. 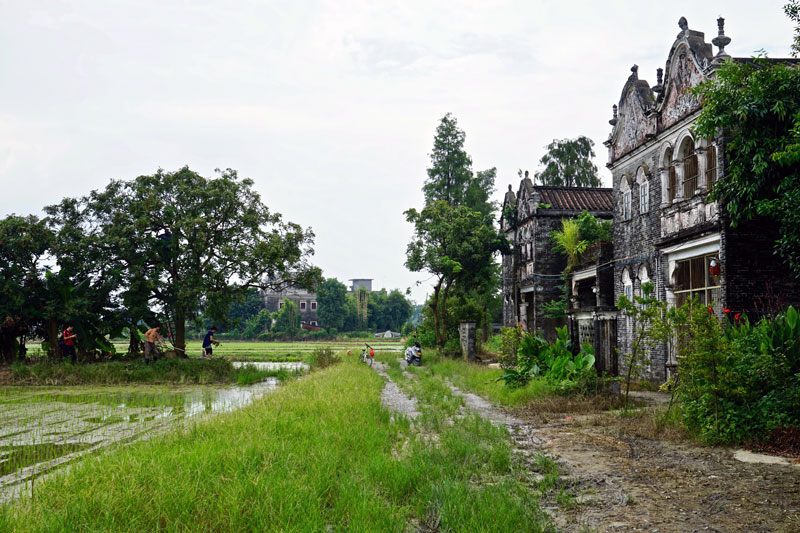 Across from the row of homes, a single lychee tree is perched on soil elevated from its damp surroundings, and a few people scale the branches, harvesting the beloved South China fruit. We ask them if they live in this village, and a man tells us no, before confirming that Canada Village’s residents all left for Canada decades ago.

There’s a certain mystique about Canada Village. Unrestored and barely touched for over half a century, in some ways this obscure plot of land rivals the tidier, consistently attended diaolou clusters nearby that earned the city its UNESCO recognition – if not for their beauty alone, then certainly for the spectacle of such beauty suspended in time, as the natural world grows, intertwines and evolves around it. 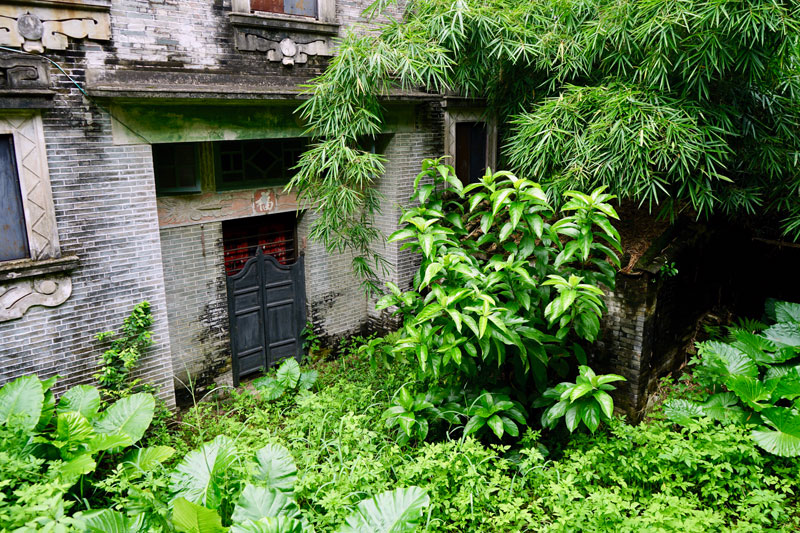 An overgrown entranceway in Canada Village. Image by Jesse Pottinger for That’s 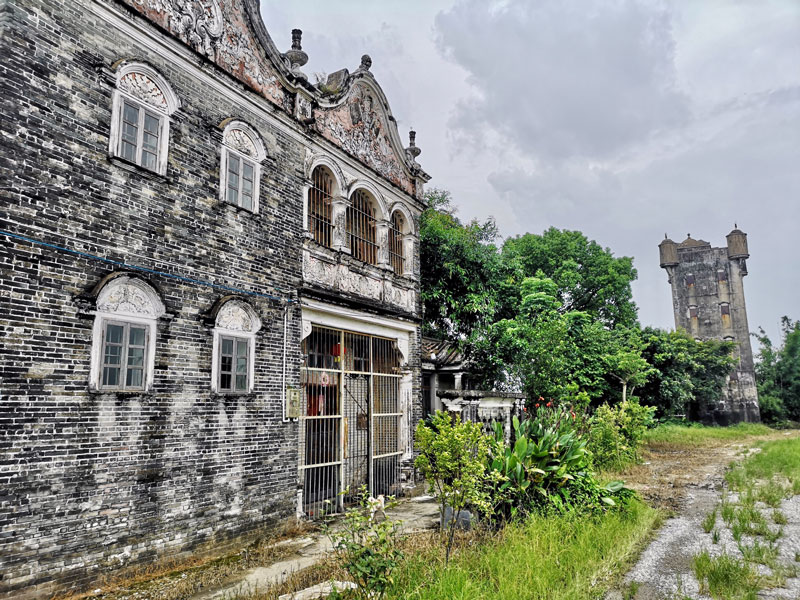 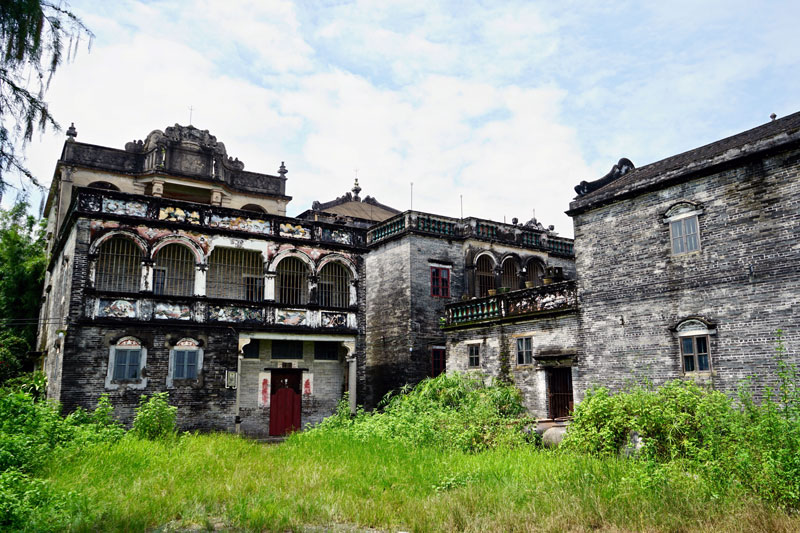 But Canada Village is not alone: In our journey through Tangkou and the surrounding area we encounter countless forgotten diaolou and homesteads.

“The local government would love to have all these abandoned diaolou restored, they’ve been empty for a long time,” says Deng, adding that there are around 2,500 diaolou in Kaiping. “I’d guess that approximately 10% of Kaiping’s diaolou are still inhabited.”

It’s not entirely clear who owns these crumbling diaolou: While numerous locals told us that the structures are ‘privately owned’ by folks overseas (who’ve forgotten about them – or don’t care – hence the poor state of many of the towers), private ownership of land is forbidden in China. 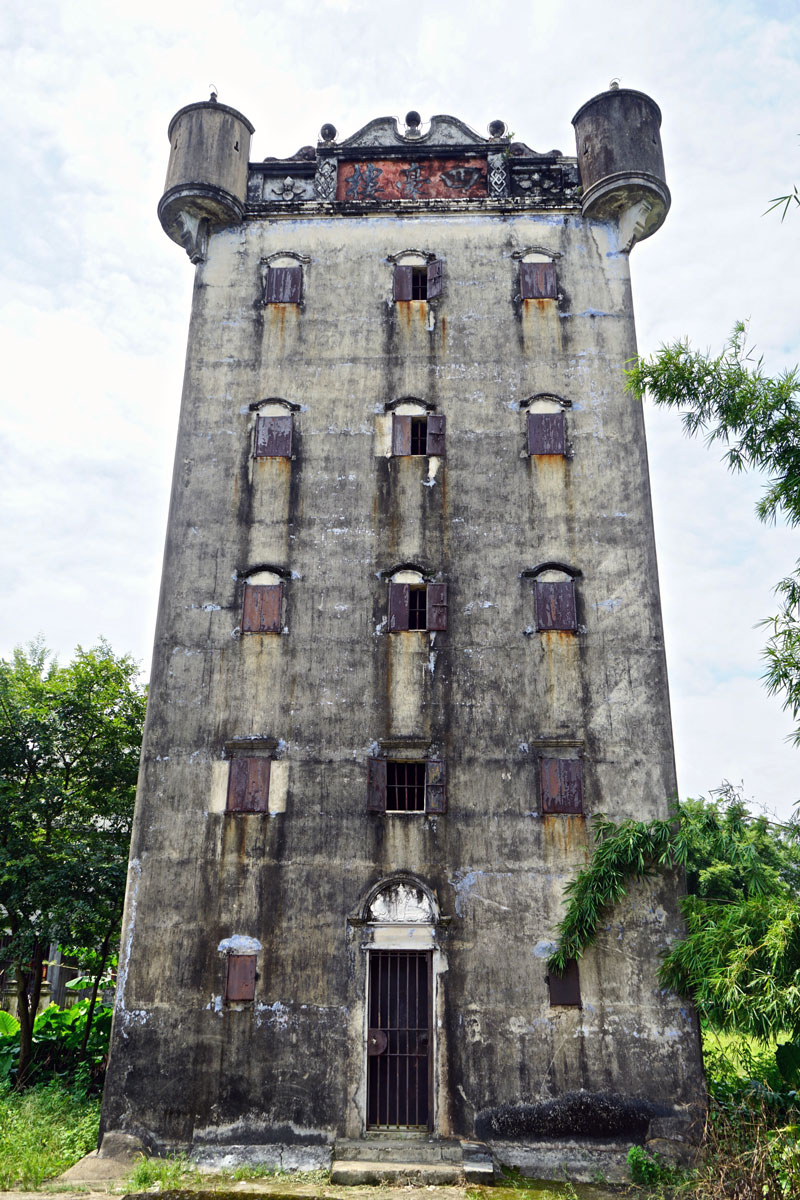 The weathered diaolou in Canada Village. Image by Jesse Pottinger for That’s

One thing is for sure though: Changes are happening in Kaiping and there seems to be a genuine interest in attracting more visitors to the UNESCO-honored area – which means many of the abandoned structures may be set for a facelift. With the aforementioned construction work going on in Chikan’s old town, it’s likely a matter of time before attention turns to other areas.

“Nowadays the government is promoting the diaolou more and more. We now have visitors; when I was a kid we had no visitors,’ Kaiyi tells us. “Maybe in the future it will be better and the abandoned diaolou will be restored.”

Read our daytripper’s guide to Kaiping Diaolou and Villages here.

Already dreaming about your next vacation? Check out our informative online travel guides or purchase our definitive guide to China, the 2019 Explore China guide book, on thMart for the limited time presale price of just RMB129. 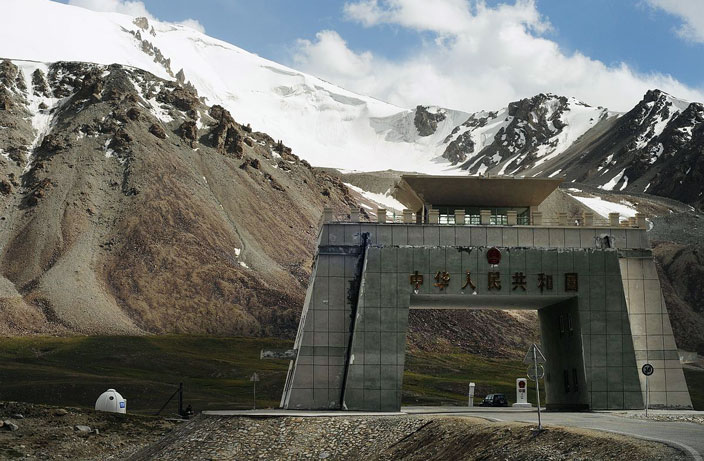 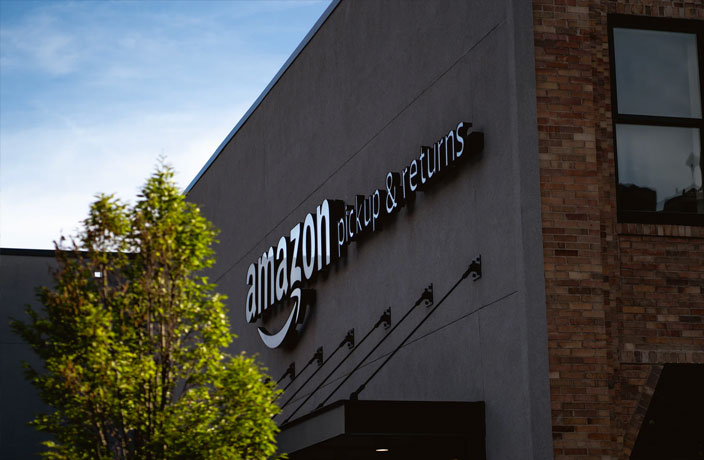 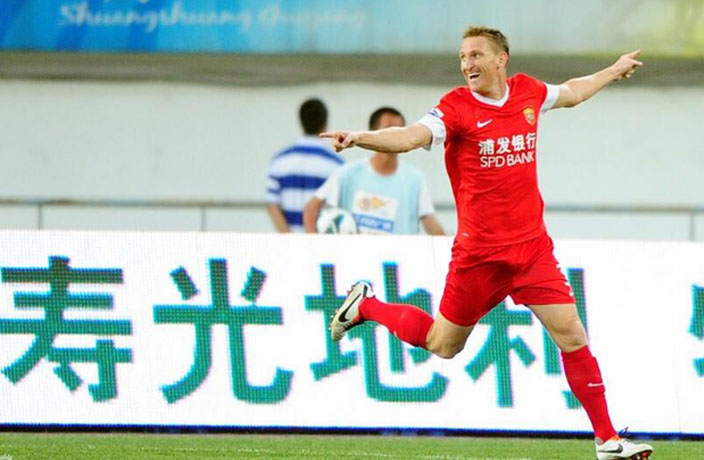 The former Shanghai SIPG striker is hoping to pull off a shock.

Two days of music by six dynamite bands, plus workshops and a flea market.

China Now Has the Most UNESCO World Heritage Sites

The World Heritage List is enriched by an ancient archeological site and migratory bird sanctuaries in the Middle Kingdom.