If you haven’t yet noticed the very smartly clad crowd of Russians that call Guangzhou home, it’s time to embrace the diverse melting pot that keeps our city so eclectically hot. Though South China has lured its fair share of models and science prodigies from under Putin’s watch, northern China – Harbin, specifically – is historically the region dominated by Russian immigrants.

Not surprisingly, the owner of Guangzhou’s latest eatery committed to brewing borsch and packing pelmeni hails from China’s Ice City, while his wife, Katusha, grew up in the snowy tundra of Yakutsk, where temperatures dip to below 40 degrees Celsius in winter. Why the couple decided to move south after running their original branch successfully in Harbin for 10 years, we’ll never know. Too many icicle eyelashes, perhaps.

New to Tianhe Bei Lu in mid June, Katusha and word of its nightly karaoke has spread rapidly among Eastern European circles. As the first formal Russian restaurant in the city (Arbat is better classified as a bar), the place is packed with Moscow natives every evening, scarfing down tastes of childhood before losing themselves in a cloud of vodka-infused jams after midnight. Chefs and waitresses are of Russian heritage, trilingual in Mandarin, English and, of course, Russian. 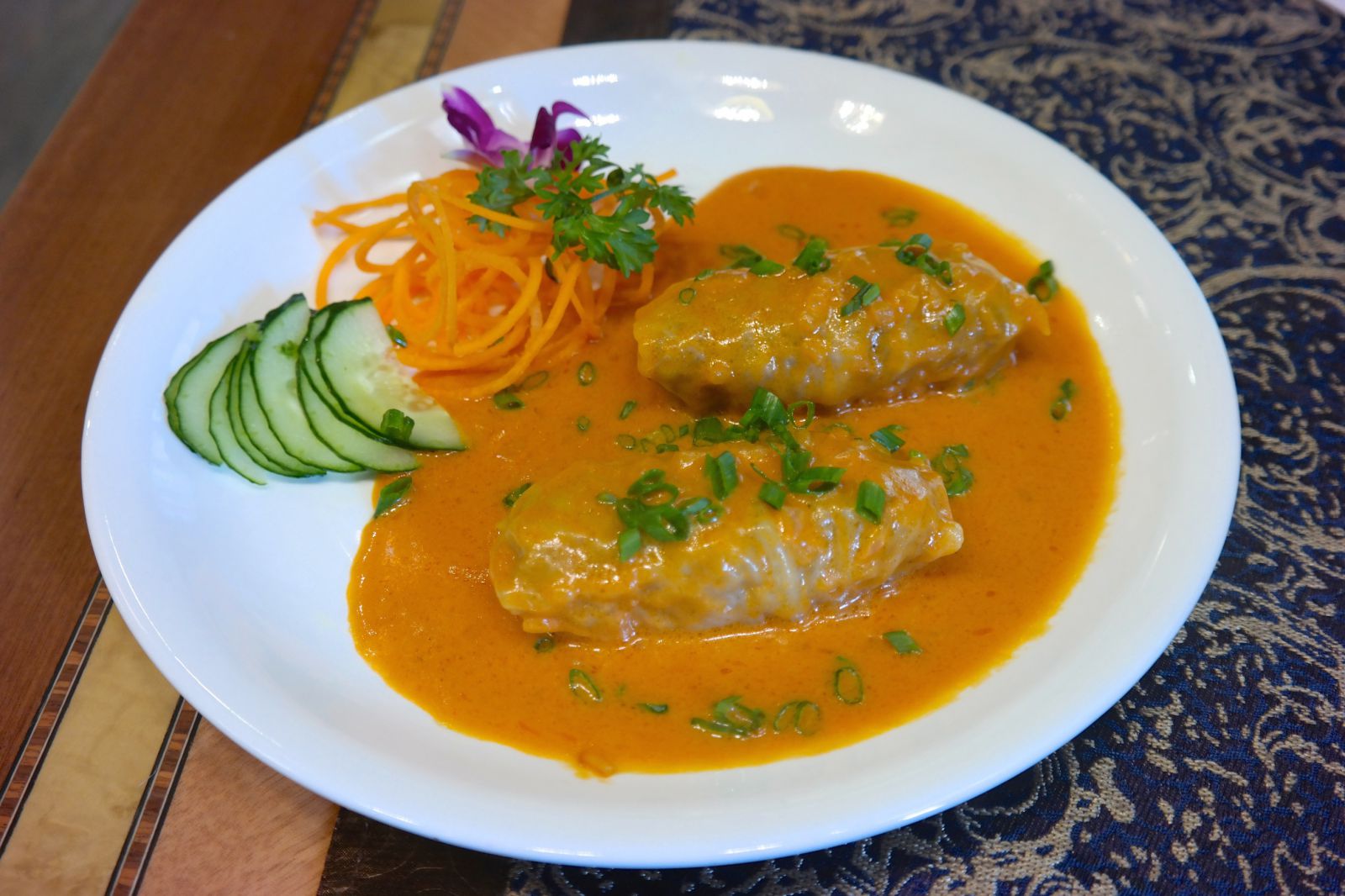 The food – extending far beyond the stereotypical potatoes and beets – was more palatable than we expected, despite its briny finish. Vexingly filling in our notoriously humid climate, one ‘light’ dish, the cabbage rolls (RMB58) stuffed with minced beef and onions covered in a tomato-cream sauce, held us over until dinnertime. This is a cuisine designed for Eskimos, after all. Dieters, beware.

Salads vary from the exotic (beef tongue, RMB45) to the ordinary (Greek, RMB58). But if you’ve made it in, why not experience a traditional countryside meal with Russian borsch (RMB28), pancakes with red caviar (RMB68), lamb kebab (RMB68) and a bowl of potato dumplings with chives (RMB35)? This is the next best thing to traveling to St. Petersburg for a hearty taste of the hinterland. If salty entrees don’t swell your ankles in this heat, feel free to indulge.

Stuffed beyond belief, we somehow buckled under the owner’s alluring assertion that “all girls love sweets” and accepted a slice of homemade cake just for kicks. Modeled after Russia’s classic layered honey cake, the piece, served on a plate weaved in lemon icing and whipped cream, stacks 10 tiers of fluffy vanilla, cream and chocolate (RMB38). Pair it with Russian tea in the afternoon for the delicious bargain of RMB50.

Lively and vibrant with Pavlovsky Posad shawls hanging decoratively above each table, Katusha will feel cozier once December rolls around. Stick it on your restaurant bucket list and stop in for a comforting repast when the weather turns bitter.

Who’s going: Putin (when in town)

[Appended: In this article's print form it incorrectly the Russian population in Guangzhou is nearly 50,000. This is incorrect and has been changed in this version.]