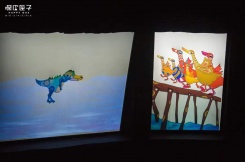 And so this story of how love, family and friendship overcomes bullies and all adversities unfolds.

Guji Guji is the story of a large unhatched egg that rolled down a hill and into a duck’s nest. The Mother Duck was reading so she never noticed the extra egg, even though it was much bigger than all the rest. When the eggs began to crack, she called the first one Crayon, the second Zebra and the third Moonlight. The fourth and largest egg cracked and said Guji Guji, so that became his name.