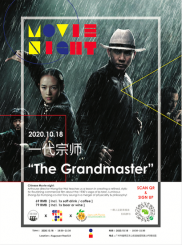 Jamie's Mandarin is alway interested in finding new ways for Chinese learners to practice the language, as well as unfolding Chinese culture to expats community.

On our 5th Chinese Movie night we will play a Kung Fu drama film "The grandmaster" on October 18th, 18:30.