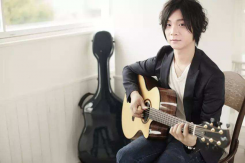 Sound Intersection is an album by two top-notched Japanese guitarist, Yuki Matsui and Seiji Igusa. Matsui, a self-taught acoustic guitar player, drew public attention on YouTube, where he shared his performances, and later released several albums and held his own recitals. Igusa, who picked up the guitar at the age of 15 after learning the piano and the drum, was a regular award-winner and has had five albums under his name. Igusa’s style was influenced by British jazz guitarist Martin Taylor and American country acoustic guitarist Boyle Dykes.