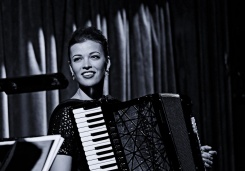 Ksenija Sidorova is an internationally recognized accordionist acclaimed for her wonderful skills. Hailing from Latvia, Sidorova picked up the accordion at 8 years old, furthered her study on the instrument under the guidance of esteemed British accordionist Owen Murray and has been active on the international stage since 2009. Her first album Carmen was released in 2016 by German label Deutsche Grammophon.