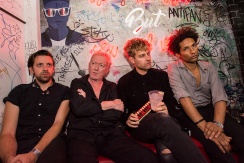 Gang of Four have been playing live shows since 1977, and are considered one of the most radical rock groups of the last 30 years. They’re energetic, aggressive and iconic, with tickets likely to sell out before their scheduled gig at Mao Livehouse. They serve as an influence to the likes of Massive Attack, INXS and the Red Hot Chili Peppers, so if any of those bands tickle your fancy, you’re going to want to check out this show.

What's On in Guangzhou: November 2019