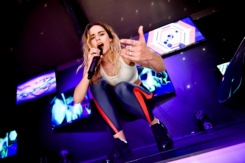 According to Clash magazine, the 21-year-old Lithuanian singer is riding high on the back of over one billion streams of her music in China. This is her second tour through China this year after she arrived in the Middle Kingdom in May. Her most recent single, ‘Runaway,’ was released in early 2019 and has already racked up close to two million views.

What's On in Guangzhou: November 2019