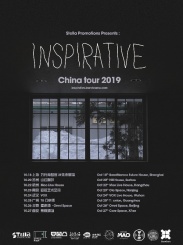 Guitarist Noppanan Panicharoen has been rocking out under the moniker Inspirative since 2006. Initially a solo project, Inspirative became a fully fledged band in 2008 and have since gone on to gain a following around the world for their inspired post rock tracks.

Despite the obvious limitations that rocking out in a EDM and hip hop loving country, fearless internet users quickly discovered the charms of Inspirative and their slow-burning, soaring guitar-driven music.