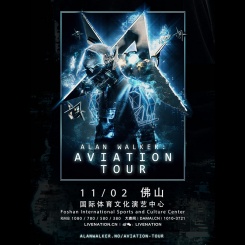 Donning his trademark mask and hoodie, Walker has made quite a name for himself in the music world, with more than 15 billion audio and video streams worldwide as well as around 40 million followers on social media. The 21-year-old first performed in Greater China in 2016, blowing listeners away in Hong Kong with his now classic hit ‘Faded’ among other tunes.

This time around, the Norwegian artist, DJ and producer is expected to perform his hit tracks, as well as music from his first album, Different World, which dropped at the end of 2018. The EDM maven has collaborated with some of the biggest names in the business, including Bruno Mars, Miley Cyrus, Sia and Avicii. Continuously listed as one of the top 100 most popular artists on Spotify, some of his more popular singles include ‘On My Way,’ ‘Alone,’ ‘All Falls Down’ and ‘Diamond Heart.’

Are you ready for Alan Walker’s Aviation Tour? We sure are! Click here or scan the QR code below to purchase your ticket before it’s too late!