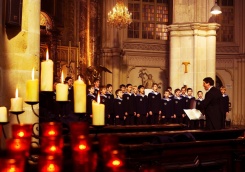 With a history spanning five centuries, the celebrated Vienna Boys’ Choir are, without a doubt, one of the world’s best boys’ choirs and are as reputable as the Vienna Philharmonic. World-class composers and conductors such as Mozart, Haydn, Schubert and Bruckner were once members of the choir, which is divided into four touring choirs named after these four musical masters. Though based in Austria, the choir is comprised of talented young vocalists from all around the world.