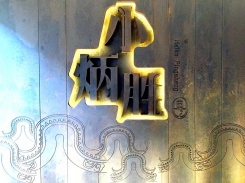 It’s hard being the younger follow-up to a legend, be it a sibling, manager or brand. In Guangzhou, Ping Sheng restaurant is revered almost as much as Coca Cola in the 80s – just without the film cameos.

Hsiao Ping Sheng, on the other hand, doesn’t have it so easy. ‘Hsiao’ means ‘small’ in Cantonese, implying a less experienced, inferior version of the original Ping Sheng. Sure, little Ping is occasionally packed to the point of handing out numbers and telling patrons it’s “impossible to predict the wait time,” but usually one can find a seat.

In traditional dim sum style, disposable menus are distributed with a pencil upon sitting down, but those who struggle to read beyond the character 包子 should opt for the arbitrarily translated, laminated version.