Spring Festival/Chinese New Year is fast approaching, and with only two weeks to go before the biggest date on the Chinese calendar, employees nationwide are turning their thoughts to the enduring promise of a new year bonus that'll make all their hard work worthwhile.

Thanks to a viral story that's been making the rounds online recently, however, everyone who doesn't work at Baidu, Alibaba, 360, Xiaomi or Tencent is seething with jealousy.

"Web Companies Annual Meeting Gift List 2015 (Confidential)" claims to enumerate all the possible awards that await the best and the brightest from these tech firms if they've performed exceptionally over the past year. 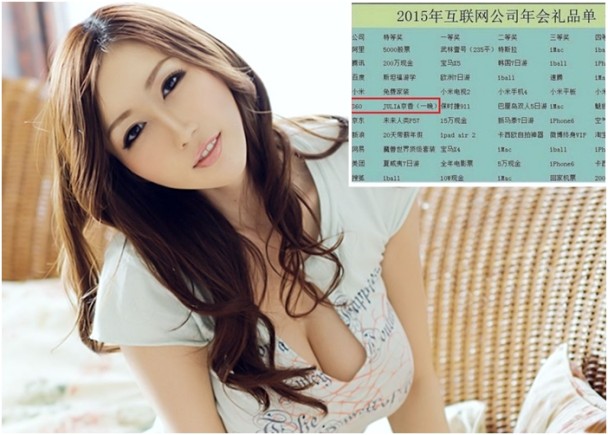 Beijing-based Qihoo 360 is supposedly offering its best employees a night with the busty 27-year-old AV actress as the the very highest of its "Special Grade Awards," nestled between a five-day trip to Bali and a Porsche 911.

Although the story is almost certainly untrue, however, the fact neither 360 nor any of the other companies exposed in the story have deemed to issue denials means that it'll die hard. Editors over at Xinhua, meanwhile, are presumably wishing they tried a lot harder at math and sciences back in their school days. Friction between China and Japan is mounting yet again...

GCHQ is putting plans in place to provide companies such as Vodafone and BT with classified information.

Sleep deprivation suspected cause after 25-year-old found in his home in Suzhou at 7am on Friday, hours after the Netherlands 5-1 mauling of Spain