Astrill users may have encountered a certain message from tech support as they logged in to their VPN this morning. The message lets users know that, if they are having trouble on their iOS platforms, it's probably because the authorities have been cracking down with vigor since the new year began. 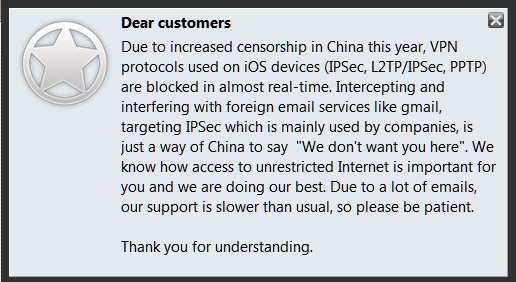 This follows news that Gmail was blocked temporarily a few weeks ago, though it has always been tricky on the mainland. Outlook was hacked this past weekend; not the web-based versions such as hotmail (now also called outlook) and live mail, but actual outlook clients –  a move that is seen as especially sneaky since the warning messages on clients are not as detailed as on browser mail meaning most people wouldn't have known there was an intrusion. The method was called "Man in the Middle", where the hacker acts as a conduit for messages, able to read everything being passed along while giving no sign that there is an attack at all.

The problems seen by Astrill (confirmed today by the That's Beijing mac-using editors) are especially worrying due to the fact that VPNs have traditionally been an established, if sometimes unreliable, conduit to the outside world. Now that they are getting hassled by the authorities, we may be in for a turbulent period of nightmarish ERR_CONNECTION_CLOSED's. WATCH: The weird world of foreign-born Asians in China WATCH: China has an official internet censorship song, and it just got censored

Sing along to the tunes of information suppression!