A primary school teacher in Fujian Province posted a bizarre story written by one of her students on Weibo yesterday, saying “nothing feels right anymore after reading this.”

When asked on an examination to use their wildest imagination and write a fairytale story, the student picked the cliché title “Prince Looks for Princess” - but from there on in, things took a very dark turn indeed. 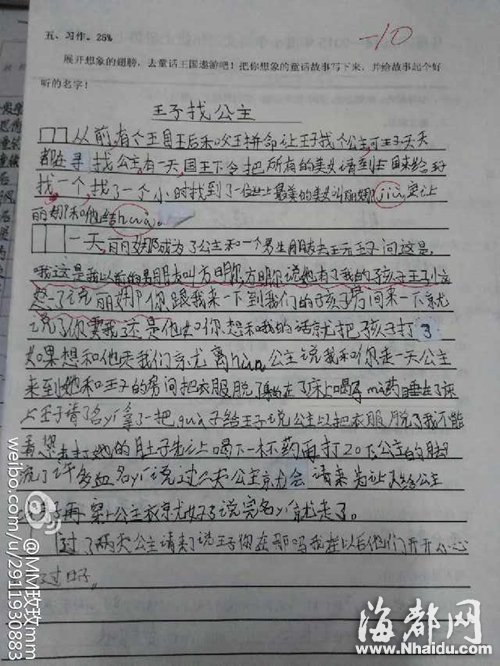 Under pressure from the king and queen to find a bride, a prince interviews all the beautiful girls in the kingdom, who have been summoned to the palace by his father. After an hour, he singles out the most comely of them all and resolves to wed her.

After they tie the knot, however, the princess heads out with a male friend one day. The prince later finds out that this palacewrecker in none other than her ex-boyfriend, and that she's pregnant with his scandalously common child.

The prince then did what anyone on a good soap opera would: he asks her to choose between him and the ex. He helpfully lays out the two options: go with the ex and get a divorce, or go with him and get an abortion.

After the princess decides to stay in the royal marriage, the prince sends for a renowned doctor to perform the abortion on her. The procedure goes something like this: they give the princess some anesthetics and then pound her stomach 20 times.

Two days later, with the bothersome baby out of the picture, the prince and princess live happily ever after. (Aww…)

Although we're not certain what the 9-year-old’s inspiration was, our guess is some unholy mash-up of dating shows and Chinese costume drama.