A 17-year-old girl in Jiangxi has been detained by police after posting photos of herself and a group of friends snorting the illegal drug ketamine at a local karaoke bar.

The photos depicting a group of young people snorting what appears to be ketamine and dancing in a private room went viral after one netizen reported to the Xinyu City Public Security Bureau. 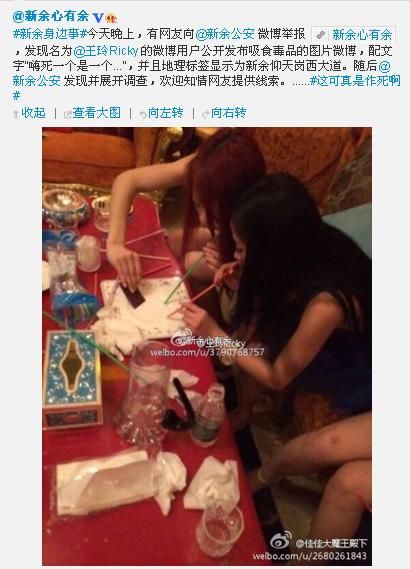 The caption of the pictures reads “We’ve been high overnight, can’t get a taxi to go back now.”

A popular local karaoke bar had its business license suspended this August as a result of a crackdown on drugs, gambling and prostitution in the city.

Chinese authorities have been taking harder approach to drug use in recent months after a number of celebrities were arrested on drug charges, including Jaycee Chan, the son of movie star Jackie Chan. A 14-year-old girl and her 25-year-old boyfriend were arrested for the murder of an unlicensed taxi driver in Kunming.

A four-year-old girl in has survived a road accident in Yueqing, Zhejiang Province on April 5 which saw her head impaled on the handlebars of a scooter, local media reports.

A 10 year old girl in Chongqing attacked and abducted a one year old boy she met with his mother in an elevator in her apartment building.

Xinhua reports that a '41-year-old Chinese man, an ex-convict, has been detained over fatal explosions in Taiyuan, police said Friday.'